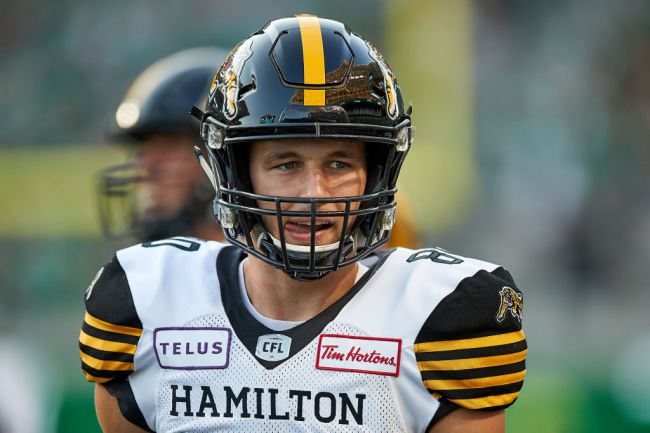 Jaelon Acklin was a dominant wide receiver on the FCS collegiate level in 2017, but he was recently offered the chance to forgo football in hopes of finding true love on reality television. The 6-foot-2, 190-pound Missouri native crossed his home state’s most eastern border to attend Western Illinois University and played for the Leathernecks (awesome mascot name) from 2014-2017, amassing 1,369 yards and 10 touchdowns during his senior year.

After graduation, Acklin spent a short period of time on the Baltimore Ravens training camp roster when an injury saw him get released prior to the season. He spent the fall working back to full strength and trying to get on an NFL roster before ultimately signing with the Hamilton Tiger-Cats of the Canadian Football League in March of 2019.

It ended up being the best decision he could have made and Acklin was named the team’s Most Outstanding Rookie. He recorded 701 yards and three touchdowns on 57 catches for the East Division champions but was unable to play in 2020 after the league cancelled its season due to COVID-19.

Fast forward to present day. Acklin resigned with the Tiger-Cats in January of this year and was set to take the field in Ontario for the season’s start in June, playing through late November if the team were to return to the Grey Cup (Canada’s Super Bowl).

However, because of the on-going global pandemic, there was a lot of uncertainty as to whether the CFL would take the field at all during 2021 and players began to look for other opportunities just incase. In April, about a week ago, the CFL announced its shifted season plans and changed its start date from June 10 to August 5. That was great news for under-contract players like Acklin who were trying to figure out what is ahead for them. For him, the timing of the announcement was bittersweet, as he told Steve Milton of The Hamilton Spectator.

“The timing is impeccable,” said Acklin. “I feel great about it because I finally get to play some football. But, I’ve been waiting so for long for the CFL to say something and when they finally did, I was actually kind of bummed out for just a moment. I haven’t had any plans for two years and just when I do, the very next day the CFL drops that on me!”

The plans that Acklin is referring to was an opportunity to find love (and fame) by appearing on an upcoming Bachelor-style reality dating show called ‘Leap of Love.’ A talent scout from Burbank, California-based Cornwell Casting stumbled upon Acklin’s social media and reached out to him about being on the show.

Set in a European castle, contestants on the dating show will not have access to cell phones or the outside world. Acklin is a single 25-year-old from small town, Missouri who is a former NFL player that is now balling out in Canada, so his bio made perfect sense for a reality dating show and Cornwell Casting arranged a Zoom call to see if he would be a fit. Here is the only teaser/trailer in existence on the internet:

Cornwell ended up offering Acklin a spot and he was set to film in Europe during July and August. Everything was in order until the CFL announced its season plans and Hamilton’s standout rookie chose to return to the gridiron.

“I was made for that show,” he said. “But I’d much rather be in Hamilton working with my teammates than on a reality TV show. I’m so glad to get back to play.”

Instead of a gorgeous European vacation and a chance to cash in on the influencer space, Acklin will head north of the border to the ever-beautiful and totally not sketchy Hamilton area for some hot, summer two-a-day workouts and bacon in the form of ham. For now, football is Acklin’s only focus and if he keeps making ridiculous catches like this, it will certainly be the right call.

True love will just have to wait, Acklin is married to the game.