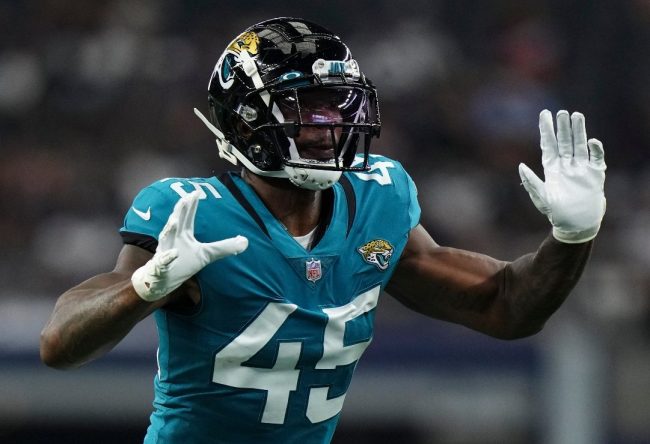 Things are kind of looking up for the Jacksonville Jaguars right now as the franchise aims for an improvement from last season. All things considered, they should be able to do just that with Urban Meyer out of the picture. However, on Friday, all eyes have been on prospect edge rusher K’Lavon Chaisson after he conducted a drill reminiscent of the New Orleans Saints quarterback Jameis Winston.

DCizzle shares a clip of Jacksonville’s prospect doing a drill in the sand. It looks absolutely bonkers, as Chaisson has T-Rex arms throughout. It looks like someone throwing their very first punch in a fight or something. It doesn’t look natural and it looks flat-out uncomfortable. Even so, the Jaguars are likely happy to see K’Lavon Chaisson working out at the very least.

K'Levon Chaisson… what the fuck even is this. Tyrannosaurus fucking Rex shit. pic.twitter.com/WFlgZlvVLF

However, it sounds like this drill is legitimately helpful and translates to the football field. Someone asked former NFL defensive tackle, Sen’Derrick Marks, exactly what is going on in this clip. Marks makes sure to let everyone know that the Jaguars prospect is actually looking great in the sand pit.

😂 I’m happy you were willing to ask instead of throwing out a lot of nonsense. What he doing is great. It looks goofy because he’s in sand. He’s working pass rush moves, muscle memory. The most impressive part is his hip turning

Okay, but K’Lavon Chaisson still looks like a chicken running with its head cut off. For that reason, some Jaguars fans couldn’t help but think of some of the Jameis Winston workout videos we’ve seen on social media.

At the end of the day, this drill looks absolutely bonkers but a former pro claims it’s legitimate. Even so, shoutout K’Lavon Chaisson for the laughs! Keep up the good work, as the Jaguars will need all of the help they can get.