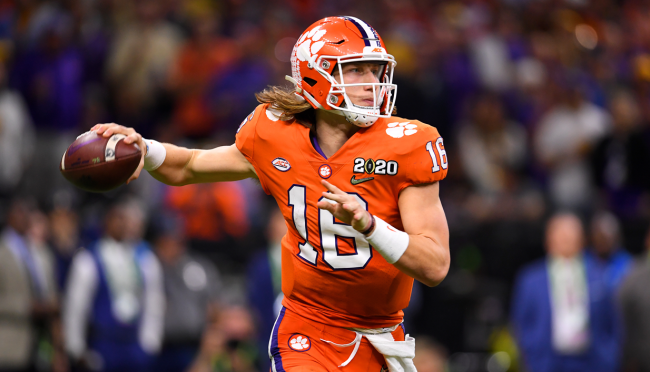 The Jacksonville Jaguars are going to draft Clemson quarterback Trevor Lawrence with the number one pick in the 2021 NFL Draft on April 29.

You know it, I know it, the whole football-loving world knows it.

The person who runs the Instagram account for the Jaguars’ stadium, TIAA Bank Field, is also very well aware of this fact.

Unfortunately, despite every NFL fan with a pulse knowing this is going to happen, under NFL rules the Jaguars cannot actually go ahead and publicly admit it. I know. It makes zero sense.

So, on Monday when TIAA Bank Field published a promo for their Meet the Pick Sweepstakes – a chance to win a special meet and greet experience with a Jacksonville Jaguars draft pick – they couldn’t actually use a photo of a potential draft pick like, say, Trevor Lawrence.

Instead, they tried to be sneaky.

Nice try deleting the number 6, moving the 1, and cropping out T-Law’s glorious mane there, TIAA Bank Field. You can’t sneak anything by the internet. We see you. (Yes, I am calling him T-Law now.)

So, does this qualify as some sort of tampering? We’re going to need a ruling on this.

Hell of a coincidence

No, it’s not Mac Jones. Or Zach Wilson.