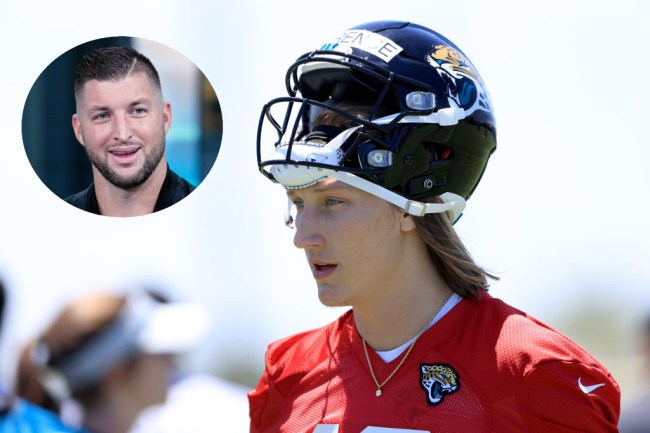 There are a number of reasons why the Jacksonville Jaguars’ signing of Tim Tebow is considered a major head-scratcher, but one not many people seem to be talking about is what sort of effect he could have on the development of Trevor Lawrence.

You may be wondering how Tebow, who was signed as a tight end, could impact Lawrence, but there is a reason for Jags fans to be worried that his signing could cause a bit of QB controversy in Jacksonville.

The only reason Tebow is getting this shot to play a new position at 33-years-old nine years removed from the NFL is head coach Urban Meyer. If Meyer isn’t in the picture, Tebow isn’t getting this opportunity, we all know this.

Meyer and Tebow go way, way back and if the former Heisman Trophy winner does make the team’s official roster, odds are the Jags are going to have some sort of package for him under center in the playbook. Jacksonville could use him in a Taysom Hill role and utilize his size by putting him at quarterback in short-yardage and goal-line situations.

Giving Tebow a snap under center is one less snap Lawrence gets to take. This is the exact point former New York Jets general manager Mike Tannenbaum made during an appearance on ‘Get Up’. He made some valid points that Tebow’s signing alone could cause some QB controversy.

“There is a realistic scenario: what happens if at the one-yard line, Tim Tebow scores on a quarterback sneak and then on the next drive Trevor Lawrence throws a pick-six? I think Trevor Lawrence is going to be great, but he’s a rookie quarterback,” Tannenbaum explained.

“There is going to be a learning curve. You do not want a quarterback controversy. I do not expect one, but given the popularity of Tim Tebow, if he has any success, and Trevor Lawrence has any sort of stumbles, which he will have, Jacksonville is putting themselves in a position unnecessarily to bring attention to that position where this should be about Trevor Lawrence’s development.

So I’m sure there have been some calls from Trevor Lawrence’s agent expressing their concern and disappointment.”

Tannenbaum has offered up some questionable opinions over the years, but this isn’t one of them, he makes a strong case that Tebow could impact Lawrence, and not in a good way.