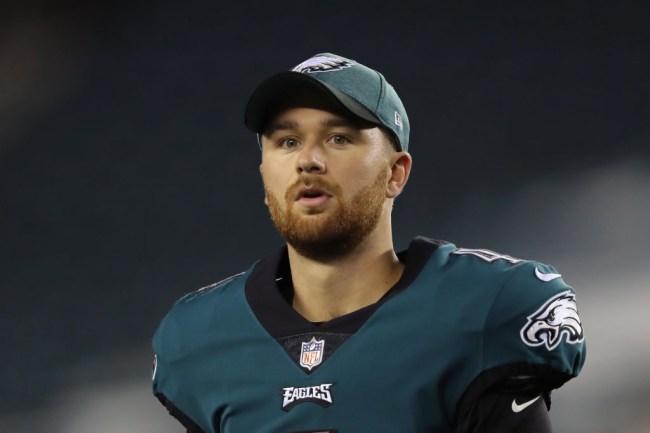 Cody Parkey feels terrible. The 26-year-old Bears kicker missed a 43-yard (tipped) field goal in the closing seconds of Sunday’s NFC Wild Card contest against the Eagles to end Chicago’s season. After the game, he told reporters, “It’s one of the worst feelings in the world to let your team down.”

Cody sympathizers will point to the fact that the Auburn product drilled all three of his field goals in the game leading up to the miss, amounting to 9 of the Bears 15 points. Or that he converted on 9 of his last 10 to close out the season.

Cody detractors will harp on the kicker hitting the upright a mind-bending six times this season to highlight a less than stellar first season with Chicago. Or that he missed seven kicks during the regular season, three of them being extra points.

The reality is that Cody Parkey is the perfect scapegoat for an offense that managed just one touchdown in the game. His rocky season was excused by Bears fans because their team put up its best regular season performance in over a decade. But, on the biggest stage of his career, Parkey had nowhere to hide and failed to deliver for his team when the game was on the line. Was the loss his fault, seeing as he put the Bears in an advantageous position to win in the first place? This question doesn’t matter for an NFL kicker.

And nobody knows that more than his opponent and former teammate, Jake Elliott.

After the game, according to NBC Sports, Elliott turned to Nick Foles in the locker room and quietly said, “I feel so bad for him.” Elliott felt so bad for Parkey that he found him directly after the game and gave him a hug.

Here is Jake making his approach. 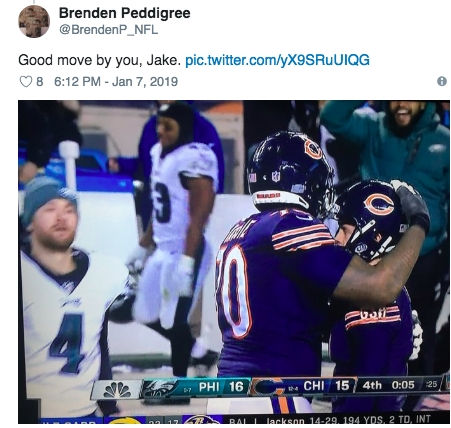 On Monday, Elliott tweeted his support for the only man ahead of him in Philadelphia’s record books for most accurate kicker (Parkey’s accuracy percentage was 87.5 percent while Elliott is second at 85.7 percent).

This is a stand up guy that a lot of young players can look up to. This is how you handle adversity like a pro. Cody is a heck of a kicker and will be for a long time. No reason to be taking the heat he is especially when that ball was tipped. #ClassAct https://t.co/Ae2kr0DYIy

Former NFL punter Pat McAfee retweeted Elliott’s comments and added a comment in support of them.

Kickers ride together, die together. Respect.