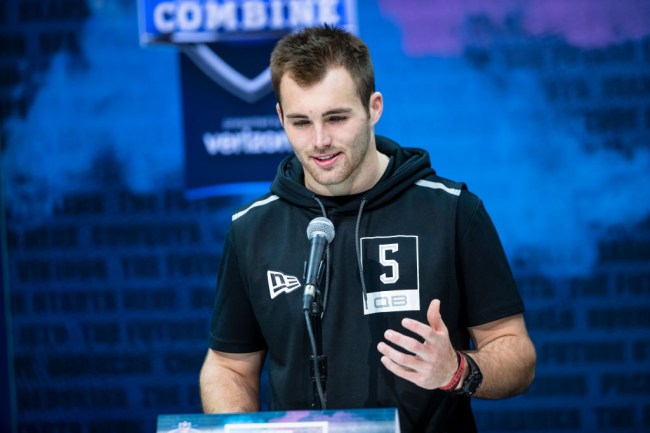 You won’t find Jake Fromm in the same discussions as Joe Burrow and Tua Tagovailoa when it comes to the 2020 NFL Draft, but that isn’t to say he’s not an extremely talented quarterback that could end up having an impressive career in the NFL.

Fromm took over the Georgia program as a true freshman and finished his three-season career in Athens with 8,236 passing yards and 78 touchdowns compared to only 18 interceptions. As far as his height and weight go, he has the build of an NFL quarterback at just under 6-foot-2 and 219 lbs.

One measurement, however, well it paints a different story.

Fromm’s hands measured at 8 & 7/8 inches at the combine, which is rather small when it comes to NFL quarterbacks. Joe Burrow’s hands were also in the news for being small coming in at 9 inches, so it’s not surprising to see Fromm’s hands being questioned as well.

Fromm is expected to be selected no later than the second-round at the NFL Draft in Las Vegas, but Michael Vick was the last quarterback to be drafted inside the first two rounds with hands smaller than 9 inches; Vick’s hands were only 8 & 1/2 inches.

Fromm was asked about his ‘sub-optimal’ hand size at the NFL Combine and had a really strong response explaining that his hands took him to one National Championship game, three SEC Championship games a Rose Bowl and two Sugar Bowls during his college career.

His mitts haven’t failed him yet.

It’s overreaction season when it comes to NFL prospects with the NFL Combine taking place, but you can’t argue the fact that Vick was the last QB to be taken within the first two rounds which could spell trouble for Fromm’s early NFL Draft hopes.

A team will obviously take a shot on him, but it may not come until after the first two rounds.