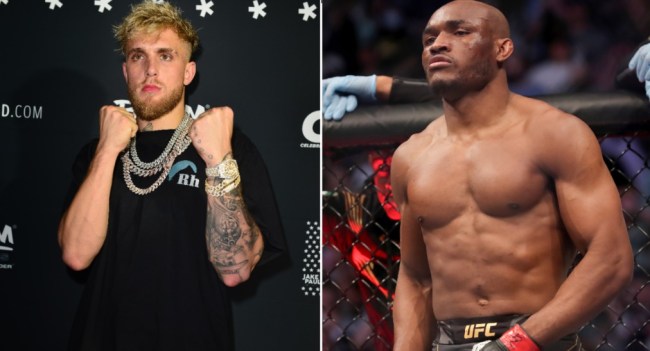 After beating down Ben Askren it appears that Jake Paul is angling for another fight against an MMA fighter.

On Tuesday, Paul sat down with ESPN’s Ariel Helwani and talked about why he likes fighting MMA guys. According to Paul, he feels like MMA vs boxing fights are more marketable and lead to bigger paydays than if he were to fight a boxer straight up. He also believes that he matches up well against MMA fighters because he says he’s a better striker than “99.9 percent” of them.

I think, combining the two worlds, the biggest pay-per-view of all time was Floyd vs. Conor. That’s boxing vs. MMA, so why not keep with that model? I believe I’m a better striker than 99.9% of these MMA guys,” “When we’re matching up from a skill, experience level, it’s even. It’s who wants it more, really, in the fight. You know, if I’m going up against these world champion boxers, who have been doing it since they were six-years-old, it’s just an unfair advantage.

Challenge accepted.@USMAN84kg if your boss Dana gives you permission to box me and make more money than you ever have, let me know and we can lace them up. I promise it will be your biggest pay day.

Keep making your money young man, and stay on that side. I ain’t no Disney kid and I don’t play fighting.

It’s probably not a good idea for Paul to try and fight Usman considering what the UFC fighter did to Masvidal over the weekend.

On the button. Perfect punch. pic.twitter.com/Ot3WArYBg3