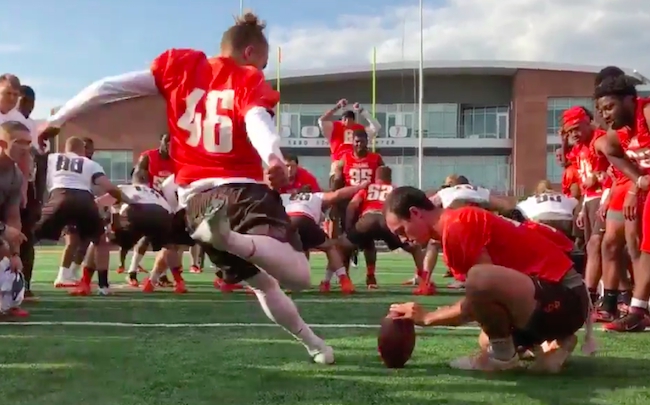 Everyone has a certain kind of internet video they turn to when they’re looking for something they know will put them in a good mood. Some people might watch dogs welcoming soldiers home, while others might prefer clips of their baby animal of choice. There’s certainly nothing wrong with either of those options, but I prefer a category that often goes overlooked: college football players getting scholarships when they least expect it.

Being a college athlete requires a tremendous amount of hard work and sacrifice, and while some players are lucky enough to have the education subsidized in one way or another, walk-ons aren’t exactly going to be the target of football boosters looking to buy someone a car. They’re essentially paying for the privilege of putting on their school’s uniform while playing alongside teammates who are still not getting paid thank to the soullessness of the NCAA.

While most of these scholarship presentations are planned well in advance, the case of Bowling Green kicker Jake Suder is a bit less traditional. Suder was in the middle of practice on when head coach Mike Jinks issued a challenge: if he could hit a 53-yard field goal, he’d be rewarded with a full scholarship.

That’s one way to get your kicker to deal with pressure.

Hit It to Win It. Coach Jinks challenges Jake Suder to a 53 Yard FG for a chance to earn a scholarship….. 🙌 #NailedIt #AyZiggy pic.twitter.com/7dr6VcienP

More cynical readers might think this was a stunt set up entirely for retweets or say that Suder was going to be rewarded with a scholarship regardless of the outcome. However, if Yahoo Sports is to be believed, this was as organic as it comes.

“Coach had two scholarships still available for kids this year and Jake was one of the few kids who they had on their short list as a possibility for those two. There had been no final determination on exactly how those scholarships would be given out. So, at practice, they were kicking and Jake was nailing them. So when they got to the long one, Coach Jinks out of the blue told him, ‘Knock this one down for a full scholarship.’”

Would we be talking about how messed up this entire charade was if Suder had shanked the kick? Maybe. But he didn’t, so let’s just try to enjoy it.