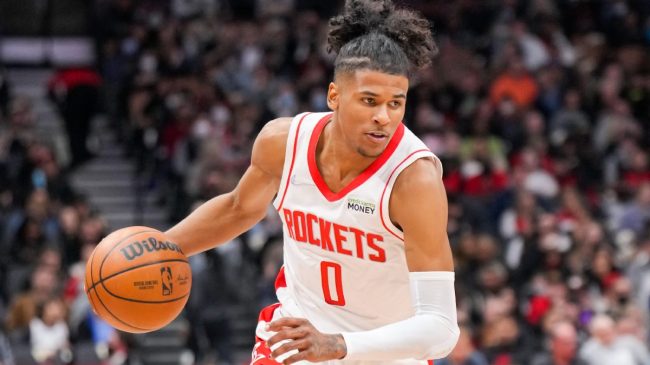 The Houston Rockets wrapped up their regular season on Sunday in a matchup with the Hawks.

Despite dropping the contest 130-114, a few young Rockets put on a show for the home crowd. In particular, it was Jalen Green.

The rookie played lights out, showing off his scoring abilities and athleticism play after play. I mean, just check out this ridiculous reverse alley-oop for proof.

Green nearly hit his head on the rim he was so high up. The bucket was one of 14 field goals on the night. He shot 54% from the floor, racking up 41 points in the process. He saved his best performance for last as the 41 points marked a career-high for the rookie.

While it was an impressive performance in its own regard, Green was also able to accomplish something that’s not been done in Houston in nearly 40 years.

Green’s 41-point showing marked the organization’s first 40-point performance from a Rockets rookie since Hakeem Olajuwon back in 1984.

Jalen Green finished the season with a bang.

The first 40-point game by a Rockets rookie since Hakeem Olajuwon. pic.twitter.com/pgkZlRcEuB

The historical showing capped off a fantastic first season for the youngster, who averaged just under 17 points a night in year one.

Unfortunately, his season has officially come to a close as the Rockets won’t be participating in the playoffs. Luckily, Houston should be able to add some more talent around Green as they’ll have a top five selection in the upcoming draft.