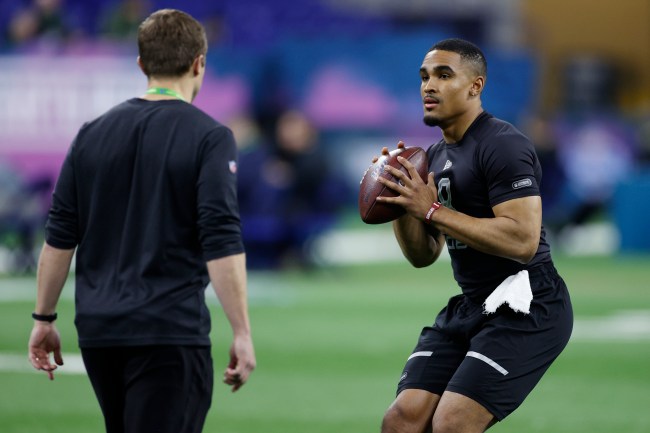 Jalen Hurts is an official member of the Philadelphia Eagles after signing his rookie deal that is reportedly worth 4-years/ $6.02M which includes a $1.94M signing bonus.

Congrats to my guy, @JalenHurts, on signing his rookie contract with the @Eagles ! I’m so honored to represent you and I don’t take a minute of it for granted. Time to show the world what it really means to be a #RAREBREED! pic.twitter.com/vuxOEjBuKY

Before he makes his training camp debut this week we were able to sit down with Jalen for a quick chat.

Earlier this year, Hurts’ was selected by the Eagles in the 2020 draft despite the fact franchise quarterback in Carson Wentz. Wentz is coming off a solid season that in which he threw 4,039 passing yards, 27 touchdowns, and just seven interceptions across 16 games but Hurts is ready to spend his rookie season in the QB room soaking in as much knowledge as he can.

“It’s a lot of knowledge in the quarterback room, so for me to have the opportunity to learn, to grow as a quarterback, I’m looking forward to it”

After three seasons at Alabama, he transferred to Oklahoma for his senior season and completed 69.7 percent of his passes for 3,851 yards with 32 touchdowns and eight picks in 14 appearances while adding 1,298 rushing yards and picking up 20 rushing TDs on the ground in 2019. After playing at two top tier programs in college Jalen is ready for whatever comes next.

“That experience in college definitely prepared me, I learned a lot, gained a lot of wisdom from coach Saban and Coach Riley”

Jalen just recently made his way to Philadelphia and despite having previously been to the city before he’s never had a cheesesteak.

“I’ve never had one (cheesesteak), it’s something I’ve really wanted to try but I haven’t had one yet. That’s definitely on my list to do list”

Training camp opens for the Eagles this week and while he’s still just a rookie he’s ready to go to work.

Hurts will be the spokesperson for the “The Pepsi Has Landed” sweepstakes this season to celebrate the brand’s renewed 7-year partnership with the Eagles. The sweepstakes will give Eagles fans the opportunity to win season tickets, signed Eagles jerseys, and a virtual meet-and-greet with Hurts himself.

To all my ⁦@Eagles⁩ fans out there, let’s show some brotherly love to ⁦⁦@pepsi⁩, the newest member of the Eagles! Make sure you head on over to https://t.co/vupBuefdIi and keep an eye in the sky for some AWESOME prizes…that’s all I’m going to say for now! #ad pic.twitter.com/DQMStu3YG5

Beginning Monday, July 27, 2020 through Tuesday, July 28, 2020, Eagles fans will be able to go ThePepsiHasLanded.com to enter for a chance to win several prize packages including Philadelphia Eagles season tickets for the 2021 season; signed Eagles jerseys; a year’s supply of Pepsi products; and the ability to win a virtual meet-and-greet with Eagles rookie quarterback Jalen Hurts.

Maybe fans who win the meet and greet will be able to give Jalen some recommendations on where to get a good Philly cheesesteak.