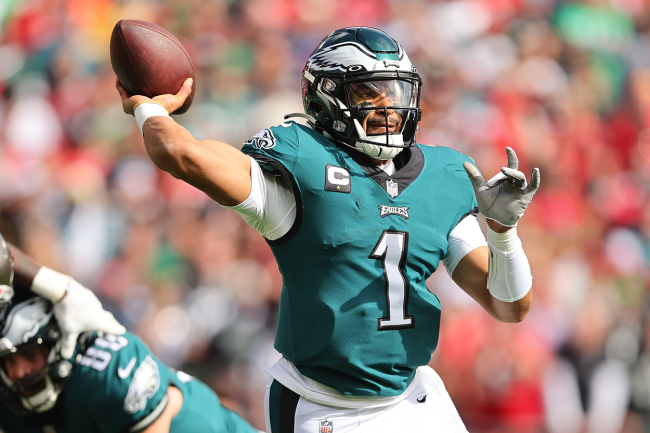 Jalen Hurts has received a large amount of criticism for his first two years in the NFL. However, when you look at the big plays that have just missed, there is a lot of potential with the third-year Eagles quarterback.

Those numbers don’t jump out off of the page. But when you factor in his 1,138 rushing yards on a 5.6 yards per carry average with 13 rushing touchdowns, the picture gets a lot better.

Despite Hurts’ struggles as a passer, his talent has been largely shadowed by the incompetence of Philadelphia’s wide receiving core. There is definitely a case to be made that all NFL quarterbacks would look a lot better if their receivers didn’t drop passes, because duh, but that is especially true with the Eagles.

A compilation of Hurts’ best throws show a lot of potential to succeed in the NFL. He is an insane athlete who has an innate ability to avoid the rush and make a play.

The only problem was that, often times, when he made the play, his teammates did not help him out.

Here are 10 examples of what Hurts can do if he reaches his full potential and plays at his highest level:

Philadelphia went and acquired DeVonta Smith with its first round pick in 2021 and added A.J. Brown in 2022. There is no excuse for Hurts not to start trending upward and find success this fall. If he can actually connect on his best throws, don’t sleep on the Eagles.