Revisiting Jalen Ramsey’s 2018 Comments About His New QB Jared Goff, Who ‘Wasn’t Even Good Enough To Earn His Starting Role’ As The Number One Pick 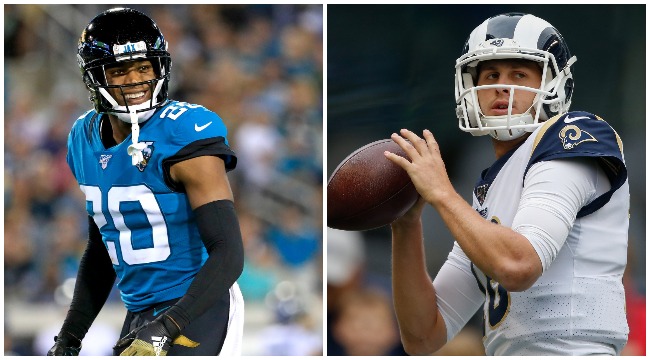 Jalen Ramsey was finally released from the grips of an unhappy marriage and has entered a new relationship with the Los Angeles Rams for the price of two first-round picks in 2020 and 2021 and a fourth-round pick in 2021.

The All Pro corner and the Jags cited irreconcilable differences, and these differences played out very publicly from the very beginning of the season.

The 24-year-old will now try to help the 3-3 Rams return to Super Bowl form, which will be particularly difficult in the coming years considering how the organization has set themselves up for the future.

Assuming they don't trade back in, the Jalen Ramsey deal means the Rams will go five years (2017-21) without a first-round pick.

In the wake of the trade, let’s revisit the comments Ramsey made prior to the 2018 season about Jared Goff in the highly-publicized GQ article.

“Jared Goff, he’s average to above average. He reminds me of Jimmy Garoppolo a little bit. Year one, he wasn’t good. He wasn’t even good enough to earn his own starting role. Like, if you the number one pick, you expected to start now. Period. He wasn’t ready to do that. He wasn’t able to do that.

Ramsey’s 2018 assessment of quarterbacks around the league are far from scripture. Let’s see how these comments aged.

Mariota is being benched for Ryan Tannehill.

Cousins is just now overcoming his phobia of throwing the ball more than 6.5 yards per pass.

Baker Mayfield: “So if they want that type of quarterback — confident, get out the pocket, throw on the run, big plays, charisma — then yeah, I understand Baker going number one.”

Matt Ryan: “I think Matt Ryan’s overrated. You can’t tell me you win MVP two years ago, and then last year, you a complete bust, and you still got Julio Jones? There’s no way that should ever happen. I don’t care.”

Ryan leads the NFL in completions and ranks second in yards passing.