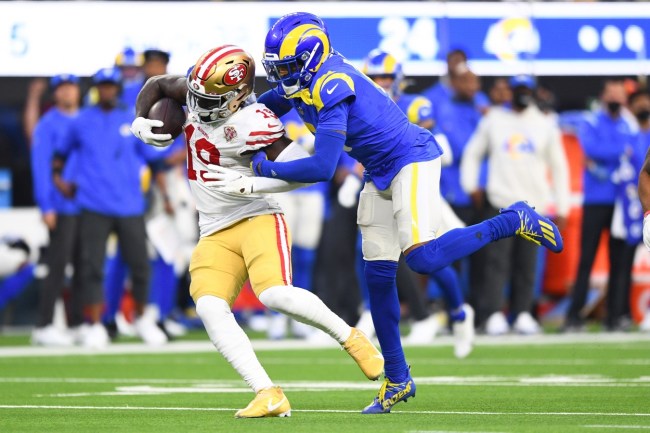 Jalen Ramsey has been one of the NFL’s top lockdown cornerbacks over the last few seasons.

Since his entrance into the league in 2016, Ramsey has picked off 15 passes while often covering the opponent’s No. 1 target on the outside. Last season with the Rams, the defender intercepted a career-high four passes to help Los Angeles take home a Super Bowl title.

So when someone asks Ramsey which players are the league’s toughest to cover, folks typically listen.

This very question was asked Tuesday on Ryan Clark’s The Pivot podcast, and Ramsey opened up about the most difficult matchups in the NFL.

The best in the world at what he does @jalenramsey dropped his top 5 of the players he’s tasked to cover. Agree with Jalen’s list?@tae15adams @cheetah @19problemz @obj@CooperKupp

Adams is a season removed from leading the league in touchdown catches. Hill and Samuel are the most dynamic wideouts in the game. Cupp just won the receiving triple crown in 2021 (receptions, yards, TDs). And OBJ returned to his All-Pro form in the NFL Playoffs.

In fact, Ramsey says that Beckham would’ve won the Super Bowl MVP had he not gone down with an injury.

But many fans believe that one name is missing from Ramsey’s list, and it stems to that Super Bowl matchup between the Rams and Bengals.

Fans have been quick to disagree with Ramsey’s list, debating how the cornerback can put OBJ over Ja’marr Chase.

While Beckham did return to form for that playoff run, his 2021 regular season was still relatively average. The wideout tallied 537 yards on 44 catches.

Chase, meanwhile, was named Rookie of the Year after racking up 81 receptions, 1,455 yards, and 13 scores. He also showed out in his only matchup against the Rams, hauling in five passes for 89 yards. He averaged nearly 18 yards a catch in his only meeting with Ramsey, and fans have been quick to point that performance out.

He should have Jamarr Chase on here as well. Jalen my dog but lil brah was smoking him

Hmm. Had to throw a bone to teammates I see. Although Kupp is legit.

Ramsey and the Rams will look to defend their Super Bowl title in 2022. He’ll likely have to cover these receiving threats in order to do so.