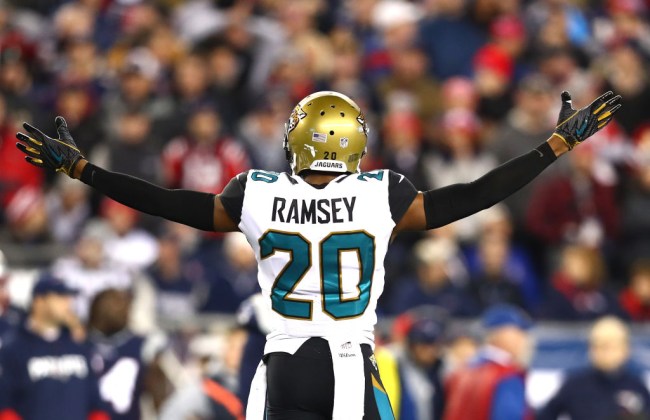 Ramsey has decided to momentarily shift his vitriol away from the NFL and take a shot at the National Hockey League.

The 23-year-old Pro Bowler told ESPN that he could “probably crack” an NHL roster in six months if he properly trained. As you can imagine, this did not go over well with NHLers, who are prideful sons-a-bitches to begin with.

Here are some responses from around the league, via ESPN.

Buffalo Sabres center Jack Eichel: “I think it’s insulting to our league. For us as players, we’ve dedicated our lives to be playing in the NHL. To think after six months you could come play arguably one of the hardest sports in the world? I mean, I think it’s ridiculous he would say that. It’s ignorant.”

St. Louis Blues winger Vladimir Tarasenko: “I can bet any money in the world and there’s no chance he can play in the NHL in six months. It’s impossible. Him saying that … it de-classes our sport.”

San Jose Sharks winger Evander Kane: “I think I’d be about 1,000 percent times better at his position in six months than he’ll be at mine.”

New York Rangers winger Chris Kreider was a bit more forgiving: “I’m sure with his pedigree and his athleticism he could play in the NHL, but it would take a lot longer than six months.”

Colorado Avalanche center Nathan MacKinnon: “I think it’s awesome, I mean, I’d like to see him skate. I think it would be pretty funny. He wouldn’t be able to stand up. I think he just likes to talk. Whatever.”

Now that this has been put on the table, I need to see it.