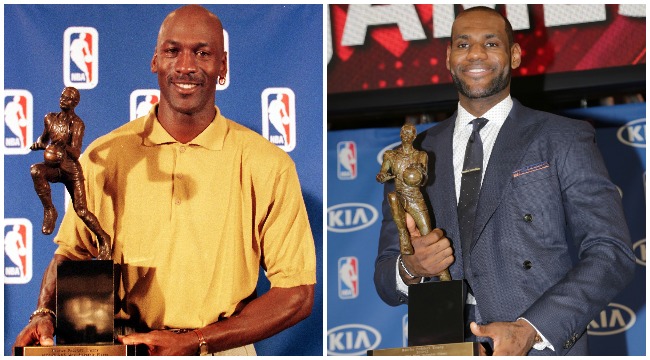 “Arguing over the G.O.A.T. is as effective as trying to solve an algebra equation by chewing bubble gum.”
-Baz Luhrmann, kind of

The G.O.A.T. debate is one of those infuriating circular arguments that typically results in the deepening of original opinions and multiple holes in the drywall.

But, us humans are masochistic beings who often engage in behaviors that are bad for us. That is why the Big Bang Theory went 12 seasons.

[Related: How Current NBA Stars Would Do In A Game Against Players From The Early 1900s]

Typically, I avoid this topic like the kid with the cold sore in the blunt circle, but we recently sat down with Jalen Rose on our Endless Hustle Podcast and he offered a comprehensive five-step criteria for determining the greatest player of all-time.

“I’m going to give you five categories that you can look at to do cross-era comparisons that will get your really close to figuring out who the GOAT is, especially in the statistical era.”

“Anthony Davis is All-NBA. Giannis is back-to-back MVP. Just a different level of player, it just is.”

4. Defensive Player of the Year

Michael Jordan has the most scoring titles in NBA history, and only he and Wilt Chamberlain have ever won seven consecutively.

Keep in mind, it’s not unfeasible that LeBron match or overtake MJ in MVPs, titles, and Finals MVPs. The dude doesn’t appear to be slowing down and may be a cyborg.

Jalen remembers the infamous 2012 burying of Skip Bayless and where their relationship stands today.

He also talks about: