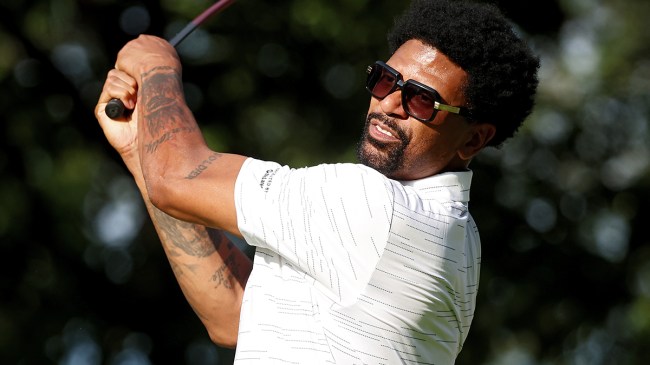 Golf is a notoriously difficult sport to both learn and master, and while there are plenty of pro athletes specializing in other disciplines who’ve successfully made the leap to the links, there are also more than a few who’ve struggled to make that particular jump.

It’s hard to think of a more notable name in that latter category than Charles Barkley, a man who spent years combating one of the most severe cases of the yips you’ll ever see before finally managing to overcome the mental hurdle that burdened him with one of the most brutal swings in recorded history.

You’d be hard-pressed to find many people out there capable of making Barkley’s former form look stellar by comparison. However, there’s another basketball player who’s managed to do exactly that thanks to Jalen Rose.

Over the weekend, the analyst best known for being a member of Michigan’s Fab Five took part in some of the festivities surrounding The Ally Challenge, the PGA Tour Champions event that was hosted at a course around an hour away from Ann Arbor.

Rose was initially slotted to play with the legendary Jack Nicklaus, but during a conversation with the golf legend, he said organizers shuffled things around after discovering he “wasn’t much of a golfer.”

It appears that admission was a bit of an understatement based on what unfolded when Rose stepped up to the tee, as he whiffed on five straight attempts before Nicklaus stepped in with some slightly sarcastic advice that nonetheless led to the former Wolverine making contact on a shot that just trickled out of the tee box.

Don't show this to anyone at @espn. @JalenRose was an amazing sport in helping to raise money for charity at The @AllyChallenge.

Rose didn’t fare much better with a driver, although he still appeared to enjoy himself in spite of his shortcomings.

@JalenRose taking full advantage of his mulligan and the crowd's advice 😂 pic.twitter.com/7dt4HKGYd2