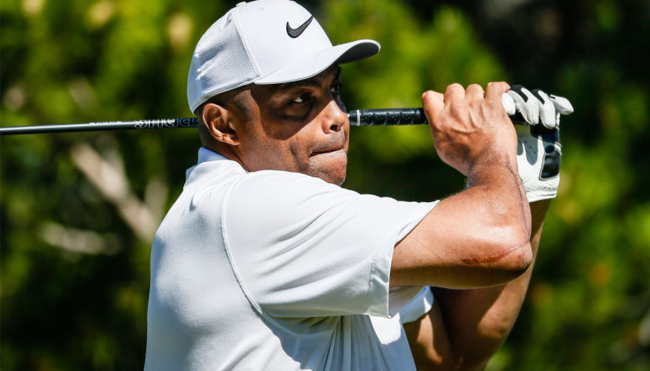 There are a ton of professional athletes who’ve been blessed with what I would describe as an “unfair” amount of talent that grants them the ability to excel at basically any sport they set their mind to. That list includes guys like Tony Romo and Steph Curry, who probably could’ve pursued a career in golf if their more noteworthy ventures hadn’t panned out as well as they did.

The same cannot be said for Charles Barkley, who established himself as one of the most dominant big men the NBA has ever seen before turning his attention to the links and establishing himself as the proud owner of what is possibly the most hideous golf swing in the history of the sport.

In 2009, Barkley teamed up with legendary swing coach Hank Haney for a television series that documented his quest to fix his horrendous technique to no real avail. However, a few years ago, he showed off his new form after undergoing a wild transformation that he’s been honing ever since.

On Thursday, a clip of Barkley taking a shockingly normal hack at the driving range while prepping for the American Century Championship at Edgewood Tahoe made the rounds on Twitter.

Guys I am on the range and Charles Barkley is hitting MISSILES pic.twitter.com/nOXz4oynat

If you’re wondering how this miracle came about, Barkley revealed his secret while chatting with Golf, saying his fatal mistake was taking lessons from “every single person in the world,” which resulted in the conflicting advice he received bouncing around his head whenever he addressed the ball.

He credits Stan Utley for getting him to change his ways, saying he realized he was balancing tips from at least 10 people during every swing when the former PGA pro asked him “When you’re over the ball, how many people are talking to you?” Once he was able to overcome that mental hurdle by blocking out those voices and focusing on the task at hand, he was able to turn things around to get to where he is today.