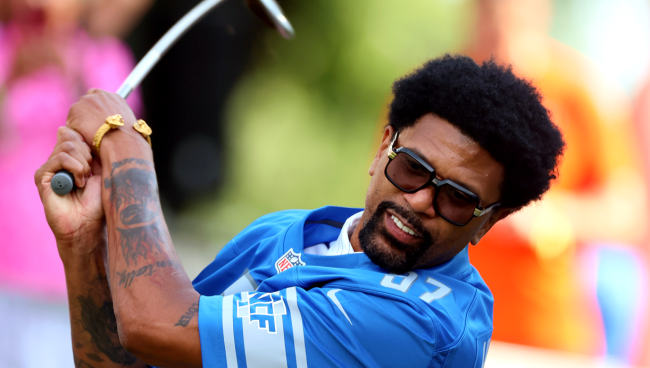 Jalen Rose is having himself a week.

First, he got clowned for getting absolutely demolished on an episode of Jeopardy!

Then ESPN announced that it had come to an agreement with Rose to continue in his role with the network.

And now his sister Tamara Rose is putting him on blast for selling their dead mother’s home… while she’s still living there!

In a since-deleted Instagram message, Jalen Rose’s sister went OFF on her brother, claiming he is kicking her out of their deceased mother’s home

“My MOTHER passed 20 Months ago! I am still grieving her loss!!! How dare you bring ANYBODY in here to go in My Mother’s room!!” Tamara wrote on Instagram.

“This man is acting as if I do not exist and I do not live here! It will be 4 years in March. He has always said, I don’t know what it is about Detroit ni$$as, I’ve been all over the world but it summin about Detroit ni$$s they think somebody supposed to take care of them!!! I’m not just sum ni$$a off the street! I’m you SISTER, grew up in the same house with you, took care of you, raised you! You would do this to me! You let these white people see you treat your Sister this way with no conscious, heart or soul! The way I’ve been bullied, threatened, taunted, harassed, disregarded and disrespected us totally.”

A post shared by GOSSIP OF THE CITY (@gossipofthecitytea)

“This is what happens when you FIND YOUR VOICE, DECIDE TO TELL THE TRUTH and are NO LONGER PROTECTING YOUR ABUSER!!!” Tamara continued. “I’m tired of being quiet, I’m tired of taking abuse in silence to maintain HIS public image! Knowing he’s been lying for the last 26 years! This man has rewritten our Family History with his LIES!

“Has left a wreckage of people behind him who were used and disposed of! You will not get away with disrespecting me or mentally, psychologically, emotionally, spiritually, physically or financially ABUSING ME ANYMORE! Keeping it ALL IN is killing ME! The TRUTH WILL SET ME FREE! Because I’m not living the lie with or about the Man anymore! He’s just as real as his hair and his teeth!! To sell your Sister out and try to force her out of Our Mom’s Home! That our Mother ABSOLUTELY did not want sold is a straight up DISGRACE and DISHONOR to Our MOTHER!…”

“This Man Jalen called me a squatter(in this video)2xs in front of a white woman who was a complete stranger!! SQUATTER??? REALLY?? I’ve lived here since 2019! Happily and was Honored to be ABLE to take care of My Mother and Grandmother in this Home until they BOTH PASSED!”