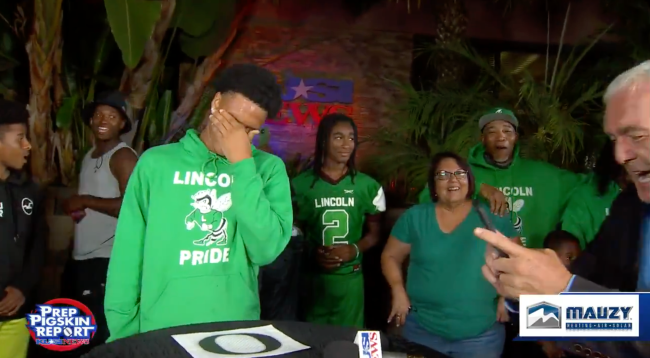 College football commitment announcements are all the rage these days. Four-star athlete Jalil Tucker decided to join in on the fun but, unfortunately, his father accidentally spoiled the surprise.

Tucker, who committed over the weekend, was live on a San Diego-area high school football show. Before asking him where he will be attending school, the reporter spoke to Tucker’s father about the impending decision.

While talking about how proud he is of his son, Tucker’s father said he is “lazy, but a good kid” who will “represent Oregon well.” The only problem was that Tucker had not yet announced his commitment to Oregon.

Tucker’s dad quickly realized his mistake and darted off of the screen as the rest of his family shook their head in both shock and disappointment. The man of the moment, Tucker himself, was able to laugh off the embarrassing moment before pulling out an Oregon hat to make the announcement official.

Lincoln High School's 4-Star recruit @TuckerJalil gets a little help from Pops as he made his college decision live on the PPR.

While Tucker’s dad undoubtedly ruined the announcement with his slip-up, there is a big Oregon O on the table that gave it away anyway. Context clues could have helped decipher his decision.

The bigger deal, one might think, was with his dad calling him “lazy,” even in a joking manner. Tucker is not the nation’s top recruit. He is not even a top-100 prospect.

Tucker is the No. 144 overall prospect in the Class of 2022 and the No. 11 prospect from the state of California. For his dad to slap the “lazy” label on him before he even decided where to go to school is not something that his coaching staff would want to hear.

Even still, the entire situation was hilarious and Oregon is very excited to have him regardless of his father’s adjective of choice.