Packers’ Running Back Jamaal Williams Takes Shot At Tom Brady: ‘Pretty Sure My Quarterback Knows What 4th Down Is’ 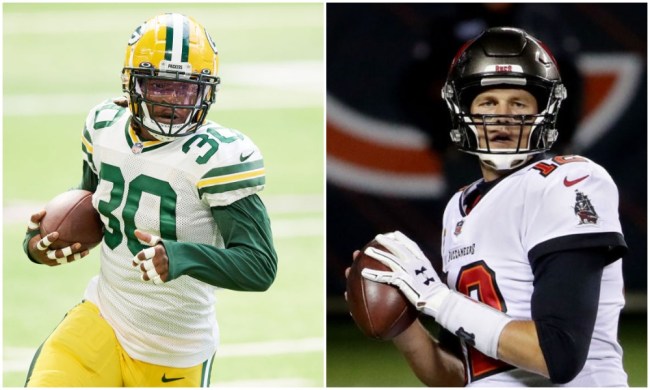 The Packers and Buccaneers square off in Tampa Bay on Sunday afternoon and with all of the hype surrounding what should be the NFL game of the week the trash-talking is in full-force.

On his own show earlier this week, Green Bay running back Jamaal Williams did not hold back when talking about Tom Brady. Not only did he clown Brady for his fourth down blunder against the Bears a week ago seemingly accusing him of not being able to count, but he also said his quarterback, Aaron Rodgers, would never make a mistake like that.

Jacob: Whose quarterback is better, yours or Ronald Jones?

Jamaal Williams: Look, I'm pretty sure MY quarterback knows what 4th down is

👀🤣 @jswaggdaddy had some nice words for @AaronRodgers12 ⤵️

Williams wasn’t finished there when it comes to ragging on Brady and bragging about his own quarterback. According to him, the Packers are simply too prepared to make mistakes like what we saw out of Brady a few weeks ago.

“We’ve got too many people who are just too ready to go. We’ve been in those types of pressure situations before so I feel like it’s just natural for us to be on top of everything and go ball. I would never expect that from my boy.”

Williams better not hope that the Packers are in a two-minute drill late in the game on Sunday and Rodgers has a mental lapse like Brady after dropping this takes about the GOAT.

Sunday’s matchup between Rodgers and Brady is just their third meeting all-time as the series is knotted 1-1.