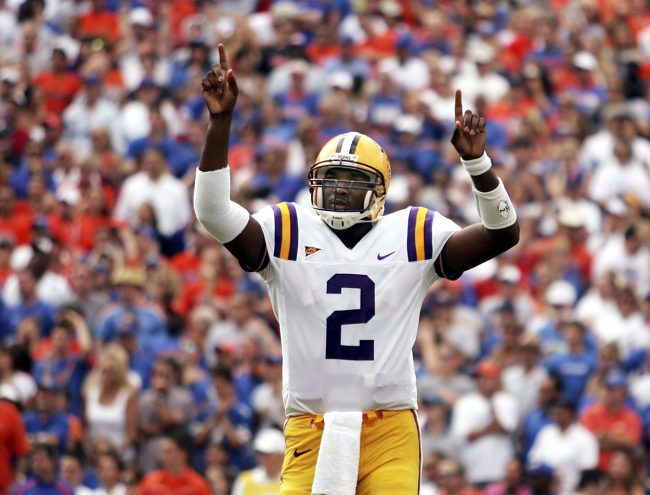 JaMarcus Russell was and is one of the best college football quarterbacks in history. The former LSU quarterback was MVP of the Sugar Bowl, won a BCS National Championship and played his way into being drafted No. 1 overall.

However, he was dealing with significant off-field issues that hindered his ability to succeed on the next level. Specifically, Russell was dealing with substance abuse issues, which he recently opened up about in an emotional letter in The Players’ Tribune.

He also spoke about his struggles on a new episode of The Pivot Podcast.

During an extremely honest conversation with Channing Crowder, Fred Taylor and Ryan Clark, Russell talked about how he used ‘drank’ to cope with his pain in college. He shared stories about how he would handle drug tests and how he would use lean instead of pills.

In addition, he set the record straight about a story that 2 Chainz once told on ESPN.

Back in 2016, during an appearance on Highly Questionable, 2 Chainz and Lil Wayne shared how Russell used to carry a book bag full of lean. They also talked about how they partied with him prior to games.

However, Russell wants to make himself very clear. He said that while there was truth to what 2 Chainz and Lil Wayne said, he clarified the story and even called out Tity Boi by name, knowing that he would hear his comments.

“I never hung out the night before no game, ever,” Russell said. “Period.”

Russell then went on to explain that 2 Chainz was talking about something he thought that he saw, rather than the truth. He didn’t appreciate the comments on ESPN.

“He was speaking on some shit he saw,” Russell said. “Not some shit that happened between he and I. And I didn’t appreciate that at all.”

Here are Russell’s full comments, in which he shares how his life is different than that of 2 Chainz and expressed that he did not like the way that the rapper glorified his substance habits:

Jamarcus Russell talking about his substance abuse and how 2 chains told a fabricated story about it: pic.twitter.com/ZGkKba0Tc4