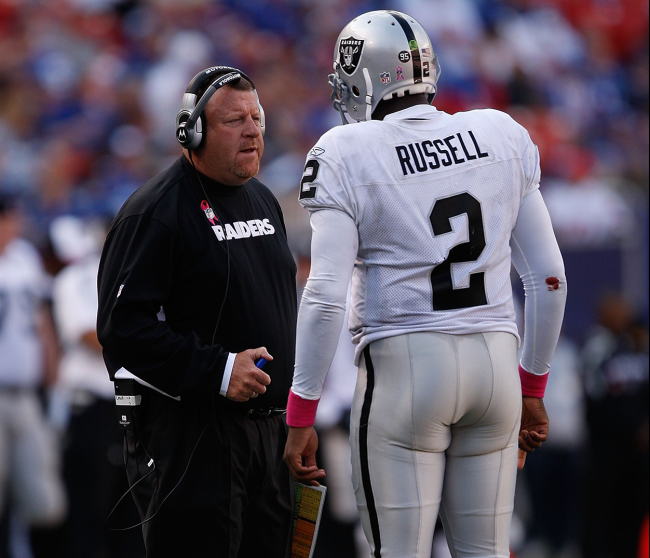 JaMarcus Russell understands that his career was not what it could have been. He is fully aware that he is considered the biggest bust in NFL history and he knows that he is often going to be painted in a negative light despite people not knowing the real him or the full story.

However, Russell is at peace with his reality. During a recent appearance on The Pivot Podcast, the former No. 1 overall pick opened up about his past and spoke about his present, even calling out 2 Chainz for a fabricated story about his partying.

It is a very profound conversation on the heels of an emotional, honest letter in The Players’ Tribune. Russell is not shying away from the hard conversations.

“Everything that went wrong, if I could have done better,” he said. “I take fault in that. Let’s get this straight: I ain’t asking for no pity from nobody under no circumstances. What happened, happened. Let’s move on. Football don’t last forever. It gave me a great start on life. I ain’t mad at nothing or nobody.”

With that being said, JaMarcus Russell remains frustrated with how things played out. Particularly with the Oakland Raiders.

While speaking with Ryan Clark, Fred Taylor and Channing Crowder, Russell says that his situation after being drafted essentially set him up to fail.

“I wasn’t doing crazy shit,” Russell said. “I was trying to chill, relax … and trying to win some football games. Unfortunately, I wasn’t winning. But I was dealt a shit hand. I’m at practice, bro, and these folks couldn’t catch a reverse, bro. Six plays straight, but you want to go downfield and catch a 90-yard pass.”

“No, I didn’t feel that [the Raiders wanted me] at all. Going into that building was like, ‘What’s going to happen today?’ I was getting fined for crazy shit. … They was trying to find ways to get paper back, I thought. Then they said I owed them money. Why would I owe them money? I signed a contract.”

In addition, JaMarcus Russell said that he felt constantly undermined by the Raiders.

He has been vocal about his disdain for former head coach Tom Cable, who took over for Lane Kiffin halfway through his second NFL season, in the past and continued to bash him on The Pivot Podcast.

“He was already jiving me from the get-go. That’s how I feel,” Russell said. “… I don’t know what’s going on in this building. I don’t know who’s with me and who’s against me. That shit was lonely, bro.”

Russell spoke about how Cable came out and said that he was the worst thing that ever happened to the Oakland organization, but said that he and Cable didn’t have a relationship before he made those comments. And that’s when the relationship was truly severed.

Russell brought up the allegations of domestic violence toward women that were made against Cable. He said that regardless of whatever happened off of the field, Cable was his head coach and he would have been behind him— until he made the scathing comments about him being drafted.

And then Russell went on to tell a story about how Cable asked his players to sign papers to come see him one-on-one after “he was talking all this shit, doing crazy stuff.” Russell says that he didn’t sign his name, but signed “Deez Nuts” in cursive, because he was not prepared to meet him one-on-one behind closed doors after he was doing all of that “hoe shit.”

While discussing his time in Oakland under Cable, Russell spoke about the blank tapes.

Back in 2018, former NFL offensive lineman David Diehl revealed that the team gave Russell blank tapes to figure out whether he was watching film or not.

David Diehl just told a great story on the FAN. Coaches didn’t think Jamarcus Russell *was studying tapes so they gave him blank cassettes. Next day, he said he watched the blitz packages. The tapes were blank.

Russell offered a unique take. He takes issue with how the team treated him.

While at LSU, Russell felt like the team cared about him. It was a family and the coach wanted to coach him. And then everything switched with the Raiders.

“Why would you play a fucking game with my life. Why would you fuck me over? You’re supposed to be teaching me so we can get better, man. I never got that. LSU wouldn’t have done no shit like that. For what? Why we even play that? If it is, so be it.”

Here are Russell’s full comments about the Cable, Oakland and the blank tape:

Jamarcus Russell talks about his experiences at LSU compared to the NFL. Confirming the tape incident and explaining his mental health at the time: pic.twitter.com/7aDzKPJmGa

You can find the full interview here: