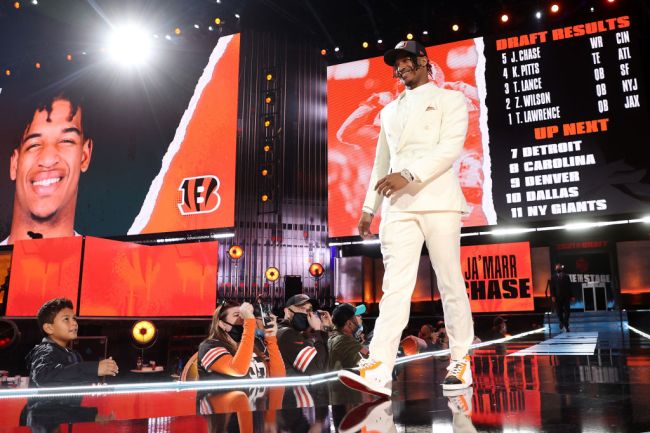 When you think about Cincinnati Bengals wide receivers your mind probably goes to Chad Johnson, A.J. Green, or perhaps Isaac Curtis. Those are three names that stand out among the greats that have caught passes in a Bengals uniform, but Cincinnati’s newest wide out, Ja’Marr Chase, has plans to be the best to ever do it in Cincy.

The Bengals called Chase’s name with the fifth-overall pick during Thursday night’s first round of the 2021 NFL Draft giving quarterback Joe Burrow not just another weapon on the outside, but a weapon he’s familiar with. Chase, who opted out last season, caught 84 passes and 20 touchdowns via Burrow’s arm during LSU’s national championship run in 2019.

It’s safe to say that Chase sees himself and Burrow picking up just where they left off in Baton Rouge as the 6-foot wideout believes he’ll break every Bengals record there is.

“I’m going to break every record they’ve got. That’s my goal right there. I’m telling you right now,” Chase said, according to the team’s website. “I don’t know how I’m going to do it, but it’s going to get done.”

There’s nothing wrong with having a lot of confidence heading into your rookie season, but he’s got a long journey ahead if he wants to catch the Cincinnati greats.

If, and it’s a big if, the Bengals can keep Burrow healthy and upright in the pocket this season it wouldn’t be surprising at all to see Chase have a monster rookie campaign.