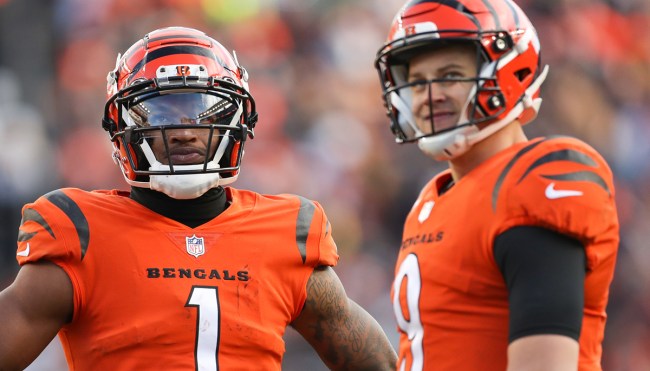 The state of Ohio has been a pretty miserable place to be an NFL fan over the past few decades thanks to the underwhelming product that defined the teams located in Cincinnati and Cleveland.

However, that all changed a couple of years ago when the Bengals did what the Browns have failed to do time and time again by successfully using a first-round draft pick to scoop up a quarterback capable of turning the franchise’s fortunes around.

Joe Burrow may not have been able to do that immediately during his rookie season in 2020, but that all changed last year after the team not only posted a winning record for the first time since 2015 but shocked basically everyone by representing the AFC in Super Bowl LVI (which they ultimately lost to the Rams by a score of 23-20).

Burrow and the Bengals got a bit of help from Ja’Marr Chase, the star wide receiver who continued to work with the quarterback to improve on the chemistry they first started building when they were teammates at LSU en route to winning Offensive Rookie of the Year Honors.

It seems like the future is pretty bright in Cincy, and Chase echoed those sentiments while reflecting on his inaugural campaign in an article that was published by GQ on Tuesday, saying:

“I was pissed that we lost,” Ja’Marr says. “But man, I gotta be happy I made it this far. I just made it to the Super Bowl. What can I complain about?”

Chase also acknowledged Burrow took the loss a bit harder than he did before sharing how he tried to raise the spirits of his QB (and close neighbor) after the heartbreaking defeat:

So Ja’Marr coaxed Joe out of bed, and they went out on the town for the first time since after they won a college title. “Bro, enjoy the moment,” Ja’Marr remembers telling Burrow.

Ja’Marr is even confident they can get back to the Super Bowl: “I can fasho say we will definitely have one or two more chances.”

That’s the kind of guy you want on your team.