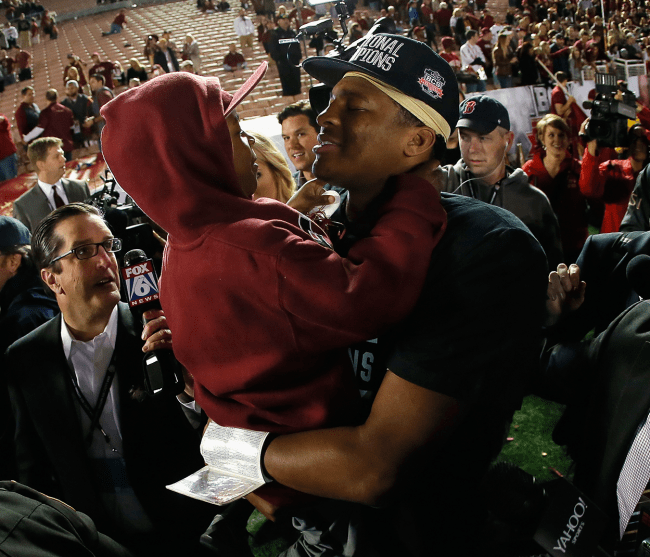 Jonah Wilson is more than just Jameis Winston’s little brother. He can sling it.

Although the younger Winston brother is still four years away from making a decision on where to go to college, the rising high school freshman is already getting a lot of hype. And deservedly so.

First and foremost, he has the bloodline. Secondly, Jonah already stands around 5-foot-11, so he is well on his way into growing close to or greater than his Heisman Trophy-winning brother’s 6-foot-4 frame.

Third, and most importantly, he has a laser for an arm. Jonah is remarkably coordinated for his age and has a really good sense of where to throw the ball and can do so into tight spaces.

Earlier this summer, Jonah visited Florida State and participated in the program’s underclassman camp. He was throwing dimes and impressed everybody in attendance.

Following his visit, Jonah opened up about his recruitment and discussed the possibility of following in his big brother’s shoes at his alma mater. While that is definitely on the table, it is likely that he will have a long list of offers by the time his recruitment is all said and done.

Jonah Winston is set to begin his freshman year at Hoover High School this fall, a program that has won 13 Alabama State Titles and holds an all-time record of 526-178-7.

As things currently stand, it appears as though senior quarterback Brewer Smith will be under center for the Buccaneers come Week 1, but nothing is set in stone and the team appears to be putting a heavy emphasis on the run game. Based on the spring game, at least.

Offensive Player Spotlight: @Jack_Lamey_13 moved to RB this Spring and put up 💪numbers in just over a half against Gadsden City. Lamey also had 3 catches for 30 yards. pic.twitter.com/dVmvaEDF8M

With that being said, Hoover’s quarterback from 2021 graduated this past spring and is headed to Northwestern. There is no clear answer for his replacement and Jonah Winston was not even able to participate in the spring game.

It is a long shot, but it is not impossible to imagine that he could win the starting job with an incredible summer. There is a slight hitch in his windup that will need to be worked out over the next few years, but it never caused an issue in middle school.

Jonah’s highlight tape from his sixth, seventh and eighth grade years is impressive. He is well beyond his years in terms of maturity, pocket presence and arm talent.

All of this goes to say that although there is still a very long way to go in Jonah Winston’s high school football career, he is well on his way. Come his senior year, it is hard to imagine a world in which he does not have his choice of where to play at any school in the country.