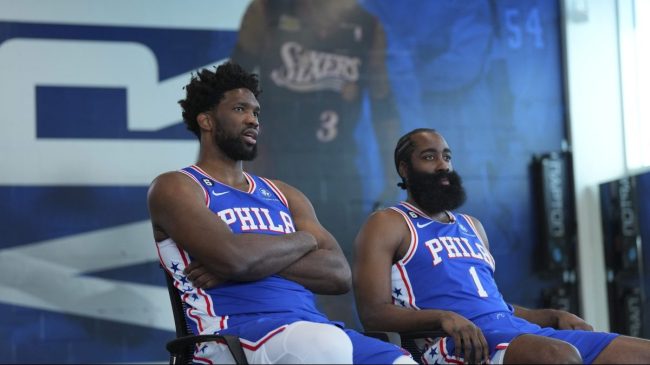 James Harden wasn’t at his expected MVP level in his brief stint with the Philadelphia 76ers last season. But that doesn’t mean that Harden wasn’t still very, very good. The 10-time NBA All-Star averaged 21 points. 10.5 assists and 7.1 rebounds over 21 regular-season games with Philly.

But those averages fell to 18.6 points, 8.6 assists and 5.7 rebounds in the Sixers’ playoff run. Those were still good enough for Philadelphia to pay Harden handsomely to return, albeit on a cut-rate deal.

Harden rewarded the team by getting in better shape in the offseason.

That’s led some to consider the Sixers among the favorites for an NBA championship in 2022-23, but a video from training camp on Thursday shows that they have a long way to go.

One of the main complaints about Harden in the 2022 playoffs was that he wasn’t aggressive enough. That was particularly true during the Sixers’ second-round series against the Miami Heat where Joel Embiid missed the first two games with an orbital fracture.

It appears Philly coach Doc Rivers is still trying to get Harden to be more of an aggressor on the offensive end as well. A mic’d up discussion between the two at Sixers’ training camp showed Rivers telling Harden to be more assertive.

To his credit, Harden appears to take Rivers’ coaching in stride. Rivers then tells Harden about the importance getting the ball to rising star guard Tyrese Maxey in the open floor.

The discussion finishes with the pair talking about the Sixers’ hierarchy and why Embiid and Harden need to get going before Maxey and Tobias Harris.

Sixers fans are well aware that what happens in April, May and potentially June is more important than what happens in September. But it sure seems like there are still some issues to be sorted out.