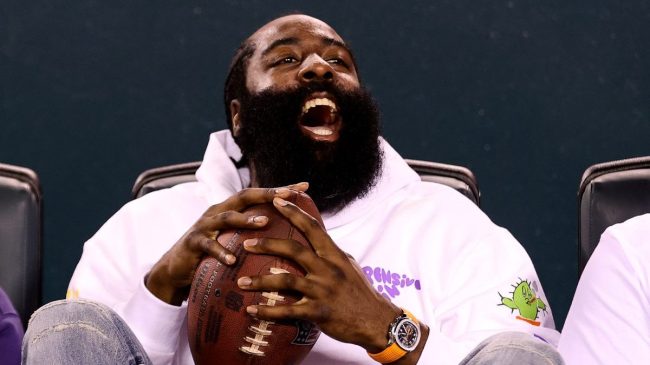 When he wasn’t palling it up with Philadelphia Eagles cornerback Darius Slay, Harden spent the offseason getting in better shape.

The former NBA MVP’s weight has long been a topic of discussion. Every offseason, NBA fans talk about how much weight Harden has gained only for him to suddenly lose the weight when the season begins.

But this season appears to be different. Harden posted pictures of himself looking slimmed down throughout the offseason. He even committed to the bit by refraining from eating any sort of sweets.

So how much weight did he actually lose in the offseason? Harden answered that question on Monday.

Harden is used to the questions about his weight. By now, they don’t appear to even phase him. So when the topic came up during Philadelphia 76ers media day on Monday, he was prepared with an answer.

James Harden was asked how much weight he lost over the summer and joked a hundred pounds. He was then asked a second time for a more serious answer, and said "100 pounds. Tweet that."

Harden claims to have lost 100 pounds in the offseason. Now, we’re no dietary experts. But the 10-time NBA All-Star was last listed at 220 pounds.

Though not everyone understood the joke.

So a dude that is supposedly a great player going into a playoff race showed up out of shape and now wants credit for losing weight? Don’t tell me he was hurt either, these guys have trainers and nutritionists, etc and could control their weight if they wanted to

Harden’s health and fitness are key to the Sixers’ goals in 2022-23. Fans are clearly happy to hear that he showed up in better shape prior to the new season.

But any questions about just how much weight he lost are a waste of time. One thing he clearly hasn’t lost is his sense of humor.