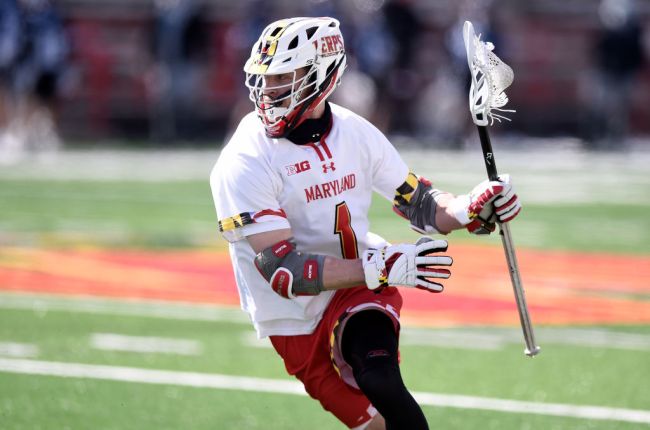 College lacrosse fans undoubtedly recognize the name Jared Bernhardt, but it’s time that the NFL football faithful are familiar with the Division-II quarterback. Bernhardt, a sixth-year senior, has played only one year of football since high school.

Now he’s one of the newest members of the Atlanta Falcons after signing as an undrafted free agent.

Six years ago, in 2016, Bernhardt was an explosive triple-option quarterback for Lake Brantley High School in Florida. As a junior and senior, he recorded more than 4,000 all-purpose yards and accounted for more than 30 touchdowns.

However, lacrosse was his future— at least initially. Bernhardt committed to the University of Maryland as an attackman and had quite the career. He was impossible to cover. 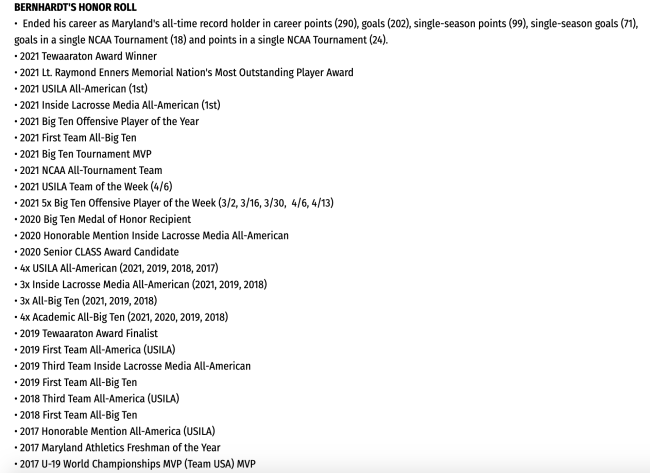 After being named the top player in Division-I lacrosse (the Tewaaraton Award is like the Heisman Trophy, but lacrosse) in the spring of 2021, Bernhardt had pretty much accomplished everything that he could accomplish in the sport. But, because of COVID-19, he had an additional year of collegiate eligibility and chose to head back to the gridiron.

He immediately earned the starting quarterback job and during the Bulldogs’ first game of the season, he popped off. His Week 1 stat line is wild:

During Ferris’ 54-14 blowout, Bernhardt was the team’s leading passer and rusher by a significant margin. The second-highest rushing total came with four carries for 42 yards.

And Bernhardt did it in style, just like he does on the lacrosse field.

Here are the full highlights from Bernhardt’s college football debut:

Not a bad start to his career. And it only got better.

During his first — and only — season with Ferris State, Jake Bernhardt led the Bulldogs to a national title.

Over the course of nine games, Bernhardt threw for 1,322 yards and 11 touchdowns. What he did with his legs was even more impressive, running for 1,273 yards and 23 touchdowns.

During the entire 14 game season, Ferris State did not lose and beat opponents by such a large margin that Bernhardt often didn’t play the entire game. The Bulldogs went a perfect 14-0 and capped things off with a 58-17 trouncing of Valdosta State in the national championship game.

Bernhardt had three rushing touchdowns during the title game before sitting for most of the second half after the score was in hand. It was the perfect way to cap an incredible year.

Now, after finishing out his eligibility, Bernhardt is headed to the NFL and there are a lot of people in his corner.

Jared Bernhardt was the best college lacrosse player in the world, graduates, does a grad transfer year at Ferris State, where as QB, leads team to an undefeated season and its first ever National title. @AtlantaFalcons signed him as a UDFA. I wouldn’t doubt him. Insane athlete https://t.co/2RCF3hscxd

It’s not hard to see why. He’s remarkable.

You can't coach this – @FerrisFootball's Jared Bernhardt escapes only to find CJ Jefferson on an insane throw! 👀 pic.twitter.com/CIiiBkaplI

Jared Bernhardt trying to get a ring in football now and this might help him do that pic.twitter.com/fKpHTUV3xQ

Ahead of the draft, Bernhardt told teams that he was willing to do anything and participated in various drills at Maryland’s Pro Day. He just wanted a chance.

Jared Bernhardt getting in some reps throwing the ball after catching a few passes from Maryland quarterback Taulia Tagovailoa: pic.twitter.com/99VORLFb4P

In the end, although he didn’t hear his name called in the draft, Bernhardt got his opportunity with Atlanta. Keep your eyes on the Big Peach because Bernhardt should never be counted out.