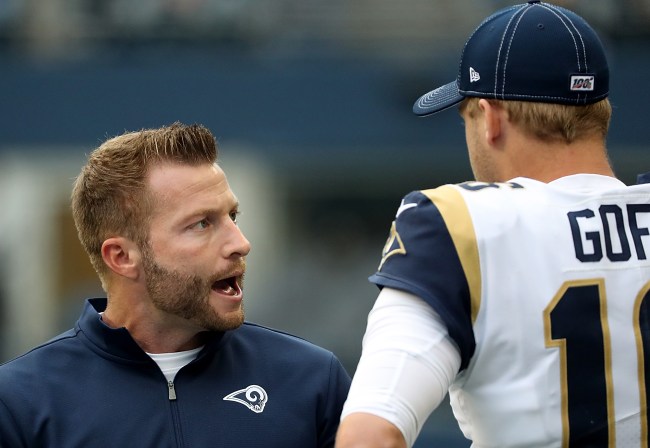 I remember in 2016 when Bill Belichick shipped off linebacker Jamie Collins to the Browns mid-way through the Patriots Super Bowl season for a bag of Cheetos and being reminded of how cut-throat the business of the NFL can be.

The recent exchange between Sean McVay and Jared Goff—a pair who just two short years ago punched a ticket to the Super Bowl—is another indicator of just how slippery the top of the mountain is and how loyalty is nothing but an illusion in a league that saw Brady jet to Tampa after two decades and leave Belichick scrambling to find a quarterback capable of throwing a screen pass.

A recent piece by Michael Silver of NFL.com documented the unceremonious breakup between the 26-year-old Pro Bowler and the Rams franchise, just days after reports circulated that Goff and McVay were in desperate need of ‘marriage counseling‘ to repair their rocky relationship.

There is arguably no more telling indictor of the couple’s soured relationship than the call that severed their four-year relationship.

When Los Angeles Rams coach Sean McVay phoned Jared Goff on Saturday night to tell the quarterback he was being traded to the Detroit Lions, Goff had barely uttered “OK” when he saw that his father, Jerry, was calling on the other line. As a man accustomed to making quick decisions in the heat of the moment, Goff didn’t hesitate.

“I’ve gotta go,” he told his soon-to-be-former boss, and clicked off to talk to his dad about the next chapter of his NFL career.

I know this is apples and oranges, but when my ex called to break it off with me, I didn’t click off to talk to my parents, I did what any normal person would do and climbed the tree outside her bedroom and demanded answers. And I wasn’t even contractually obligated to move to Detroit.

Jared Goff is a better man than I.