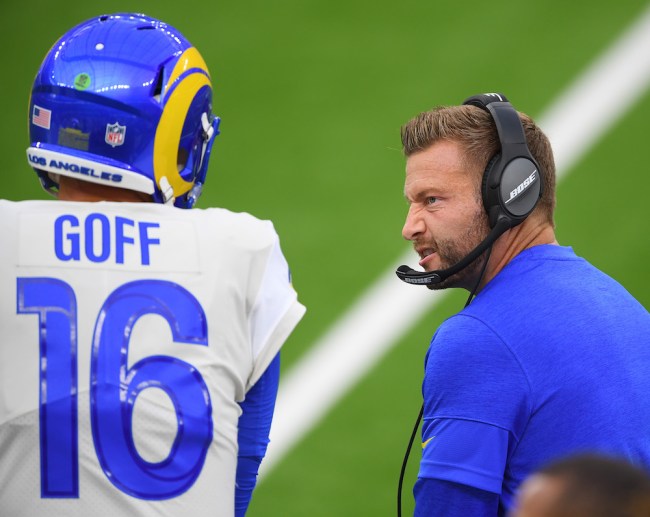 Although the Los Angeles Rams reached the NFL Playoffs this season, everything wasn’t as smooth as one might expect. Sure, the team won 10 games and had the No. 1-ranked defensive unit in the league, but, man, that offense sure looked pathetic. In fact, the Rams scored more than 30 points just three times — which is a far cry from a couple years ago when the team’s innovated, young head coach, Sean McVay, helped guide the offensive unit to a No. 1 ranking by reshaping quarterback Jared Goff.

After a couple inconsistent seasons in the league, Goff, a former No.1 overall pick, seemed to be taking a giant leap alongside McVay, not only having a touchdown-to-interception rate of 82-35 from 2017-19, but helping take the Rams to the Super Bowl in one of those years, too. It really looked like the signal-caller was set to become a perennial Pro Bowler… until the 2020 NFL season.

This season, Jared Goff struggled with accuracy, decision-making and injuries, which, in effect, played a huge part in his team’s offensive struggles. And after a season of missed opportunities, the quarterback’s relationship with McVay apparently is pretty rocky. So much so that, according to NFL Network’s Steve Wyche, the two need “marriage counseling” to repair things before next season.

Per The Spun, via USA Today Sports:

“The people I’ve spoken to said basically, at this moment, the relationship with Goff and McVay: not great,” Wyche said. “They need marriage counseling is what one person said to me. I think this is something that they’re going to be able to work through, but there’s got to be some healing and that’s not just with Jared Goff’s injured thumb.”

If you’re a Rams fan, this is obviously bad news. If there’s anything we’ve learned from the past, well, forever, the relationship between a head coach and quarterback pretty much makes or breaks a team, so Goff and McVay better figure this thing out before next NFL season kicks off.

While there were a few moments that probably led to some hurt feelings, according to Goff himself, not starting the Wild Card game against the Seahawks after a thumb injury was one that really stood out. He told NFL Network’s Mike Silver that it was “one of the toughest things he’s had to go through.” Silver also added that Goff and McVay had some “long, heartfelt discussions” prior to the team starting John Wolford — who Goff replaced following his own injury in the first quarter. But, even then, Goff’s feelings seemed hurt.

The Rams are still rock solid on both sides of the ball with the defense led by Aaron Donald and Jalen Ramsey, and the offense having several playmakers at key positions. But unless Sean McVay and Jared Goff fix these communication issues they seem to have, the team will probably continue to be a good team, just not a championship team.