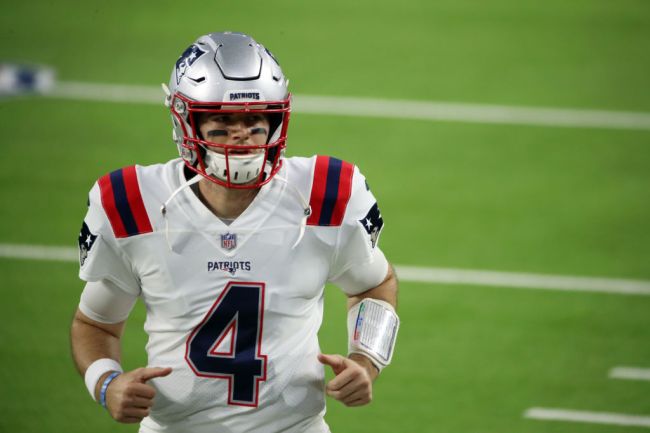 On paper, Jarrett Stidham is someone that fits the script of a QB that could find success in the NFL. He’s 6-foot-3, 215 pounds, and is impressive on his feet, but fell all the way to the Patriots in the fourth round in the 2019 NFL Draft.

It seemed to be a perfect scenario for Stidham going to New England in 2019. He was able to spend a season learning from Tom Brady, and then when Brady left for Tampa Bay, it opened the door for Stidham to legitimately step in and compete for the starting role. That hasn’t panned out, however.

The Patriots handed the keys over to Cam Newton and Stidham has made just eight appearances, and zero starts, since arriving in New England. So, what gives?

According to QB coach Jordan Palmer, who has worked with Stidham for years, the reason he hasn’t been able to find the field in New England has nothing to really do with his ability and everything to do with the two offenses he played for during his time in college.

Stidham spent his freshman year at Baylor before transferring to Auburn to play under Gus Malzahn. Palmer explained during an appearance on Tom Curran’s Patriots Talk Podcast that both offenses did nothing to prepare him for the NFL.

“People don’t know this. Art Briles’ offense, basically nothing in it would help you play in the NFL. The way you read defenses, the way you go through — I’m not saying it wasn’t prolific at Baylor. He took a team out of Waco, Texas, and made them a top 10 team. But none of it translates.”

If you thought his words about Brile were tough, he went even more in-depth for how elementary Malzahn’s offensive system was at Auburn.

“Gus Malzahn’s offense at Auburn, I think, even further from the NFL than Art Briles’,” Palmer continued. “In Gus Malzahn’s offense, they don’t even call the receivers – they’re not even letters, they’re numbers. There’s a one-man, a five-man, a seven-man, a three-man.

“And this isn’t an indictment on his offense. He won a national championship with Cam Newton. I’m just saying, what they expect you to know on offense at Auburn is the furthest thing from NFL offenses. And I think the Patriots offense is the most complex.”

Palmer isn’t going to say anything bad about Stidham and he’s certainly not going to knock any of the work he’s done with him over the years, so he pointed the blame at Briles and Malzahn. It’s not necessarily the job of head coaches to prepare QB’s to play in the NFL, college coaches are mostly concerned with, ya know, college football.

Nevertheless, those are quite the critiques from Palmer.