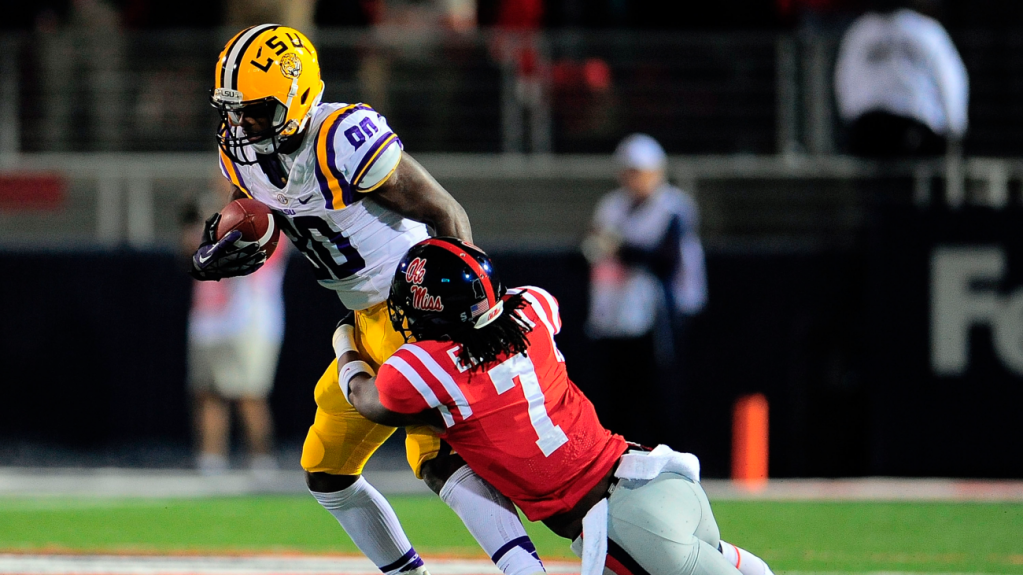 Before breaking ankles in the NFL as a 5-time Pro Bowler, Jarvis Landry grew up in Metairie, Louisiana which is part of the New Orleans metropolitan area. So the fact that he went to LSU, played for Les Miles, and combined with Odell Beckham Jr. as one of the most dangerous wide receiver duos in college football history isn’t that much of a shock given how close Baton Rouge was to his hometown.

But prior to signing with LSU, Jarvis Landry was still a highly sought-after recruit with Auburn, Michigan, Notre Dame, Oklahoma, and Tennessee on his list as well. Noticeably absent from Landry’s recruiting list was Nick Saban’s Alabama Crimson Tide.

Jarvis Landry joined fellow NFL players/alums Cam Jordan and Mark Ingram on the Truss Levelz podcast to talk about everything under the sun. And when the topic turns to recruiting, Jarvis reveals how Nick Saban’s actions removed Alabama from his list starting in his sophomore year of high school.

Jarvis Landry: [16:40] “So I leave Tennessee and we stop down in Alabama. Obviously, I know who Nick Saban is. He coached at LSU for a long time while with Glen Dorsey (nose tackle), that’s my first cousin. So that was another person that I looked up to like ‘damn, how far can you go,’ right? Nick Saban coached him, whatever, blase blase, I always heard great things about Nick Saban.”

“I got to the school (Alabama), we walk up in there, maaaaaan…. Nick Saban comes walking right past me. Looks at me. Puts his head down and walks into the room and goes into the (intro) meeting like ‘Coach, this is Jarvis Landry from Lutcher High School, he’s a sophomore’ or whatever it was.”

“Man, he kinda like (eyes up and down)… I was like, yooo. I toured the school and then went back up there to talk to him and he was pretty much kinda saying like ‘he built this’ (Alabama) and I ain’t like that. I ain’t like that persona, know what I mean? I respect him as a coach and as a disciplinarian and all that stuff.”

“But as someone that was young and I’m from the hood, I’m from the projects, the messages just ain’t sit right. And from that point on I wasn’t even trying to talk to Alabama ever again.”

You can listen to the full episode here:

You don’t often hear from players Saban missed out on explaining how it with Coach Saban’s own words and actions that caused the outcome so it’s an interesting perspective here from Jarvis Landry.

Other points of interest in that podcast that are worth listening to are how he got the nickname ‘Juice’ (2:50), how he and Odell Beckham Jr. became close friends (15:36), and how he got a new start in New Orleans with the Saints (52:58).