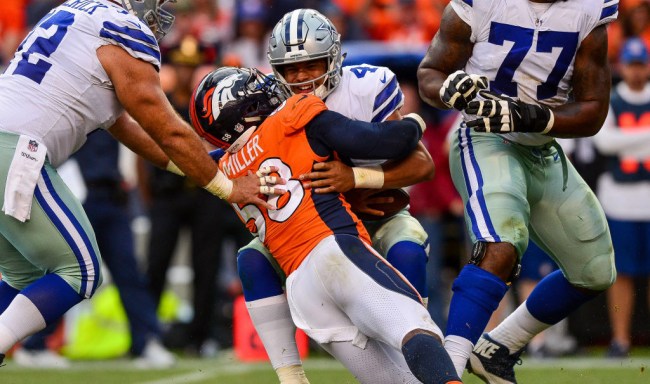 So despite the hand-wringing taking place by Cowboys fans after being completely dismantled by the Broncos 42 to 17 on Sunday, there was still much joy across America.

Now, as is almost always the case when the Dallas Cowboys struggle, even a little bit, people associated with the team are already beginning to point fingers. One of those people? Cowboys head coach Jason Garrett. And his finger is pointed directly at quarterback Dak Prescott.

“When they play that style of defense, you have to be able to consistently attack with the passing game,” coach Jason Garrett said. “At different times today, I thought we were able to do that, and at other times we weren’t. We didn’t make the plays, for whatever reason.

“We really needed to have [consistent] success throwing the ball. We were not able to do that.”

“I do not think this is a picture of what our team is, at all,” owner Jerry Jones said. “I won’t accept that.”

However, one person who knows a thing or two about the Dallas Cowboys, Hall of Famer Troy Aikman, decided at one point while watching Prescott play on Sunday to go THERE…

“They’ve lost out on some of the big plays that they used to get when Romo was quarterbacking,” Aikman told America when the Cowboys trailed 35-10 with five minutes remaining in the third quarter. “They haven’t been able to get any big plays this afternoon.”

As for what Prescott thought of his performance…

“I don’t know if they necessarily took that much away from us, more than it was me not making some throws for the most part. They did a good job. They’re sticky defenders. They were on us, and they made me throw in tight, tight windows.

“I simply didn’t make some of them.”

You know who totally would have made those throws? I’m not going to say it.