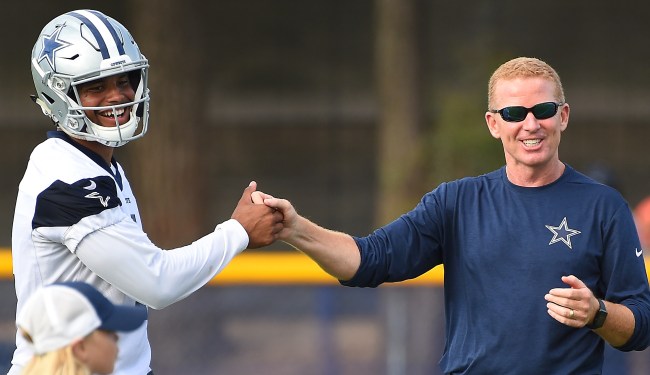 After losing three straight games — therefore allowing the Philadelphia Eagles back into the thick of the NFC East race — the Dallas Cowboys righted their ship on Sunday afternoon by handling the Los Angeles Rams at home by a score of 44-21.

Needing a win to maintain first place in the pitiful NFC East, the Dallas Cowboys stomped on the Rams in front of their home crowd in what was likely their best performance of the season.

For the first time in months, all three phases of the Dallas Cowboys team contributed — offense, defense, and special teams — and as a result, the Cowboys reestablished their inside track on winning the NFC East.

Following their epic victory of over the defending NFC Champions, both veteran linebacker Sean Lee and franchise quarterback Dak Prescott gave credit to head coach Jason Garrett and his pregame speech for inspiring the team to play for each other.

Speaking to reporters following the game, long-serving linebacker called Garrett’s pregame speech was “one of the best speeches I’ve ever heard from him.”

“A bunch of guys voiced it,” Prescott said Sunday after the Cowboys’ 44-21 win over the Rams. “Looked at each other and said: ‘I got you. I’m going to pick you up.’ We were able to do that tonight, and that’s something we’ve got to continue to build on it. [via USA Today]

The Cowboys wrap up their 2019 NFL season against divisional opponents, as they take on the Eagles in Philly and the Redskins at home in the final two weeks of the season.