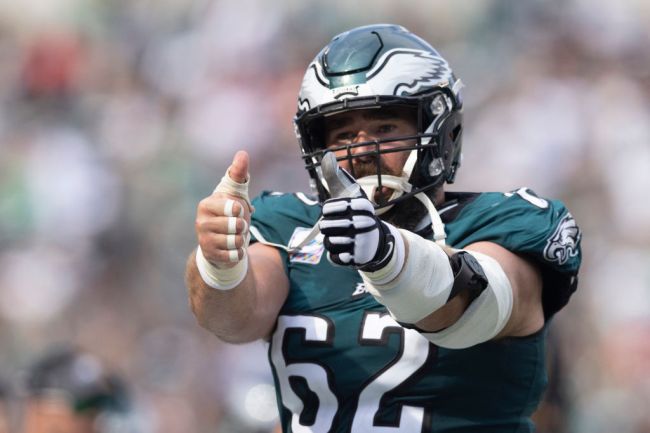 Everyone in Philadelphia seems to be over the Ben Simmons drama, and that includes Eagles center Jason Kelce.

The situation between the Sixers and Ben Simmons has been dragging on for months now, but it’s felt like years given the uncertainty and utter bizarreness around it all. Simmons wants out of Philadelphia, we’ve known this for quite a while, and the city’s extremely passionate fans have played a role.

It’s no secret that Philadelphia has some of the most intense fans in all of sports, even Aaron Rodgers thinks Eagles fans are the best trash-talkers in all of the NFL.

Jason Kelce, who has spent his entire NFL career with the Eagles, knows all about Philadelphia fans. He offered up his opinion about the Simmons situation and got very honest about what it’s like playing in Philly. Kelce also shared some advice that Simmons may want to take note of.

“If I just do this better, if I go out there and ball, play really good, nobody is going to have any choice but to love me and appreciate me as a player,” Kelce said. “You write your own narrative.”

“What’s going on with Ben Simmons and the 76ers, all that is going on because of a lack of accountability, a lack of owning up to mistakes, and a lack of correcting things. If all that got corrected, you fix some free throws and you’re getting better as a player, none of this is happening.”

Then, Kelce really hit the nail on the head.

“Everyone can bitch and complain about how tough this city is to play in. Just player better, man, this city will love you.”

"Everybody can bitch and complain about how tough this city is to play in. Just play better, man. This city will love you”

“That is because a lack of accountability. If that got corrected, you fix some free throws…none of that is happening” pic.twitter.com/9eGG9aYt9B

Nothing but facts from Kelce here. It’s gotten to the point now where Simmons likely can’t just go out and play better as Kelce suggests, but maybe he can take that advice into the next city he plays for.