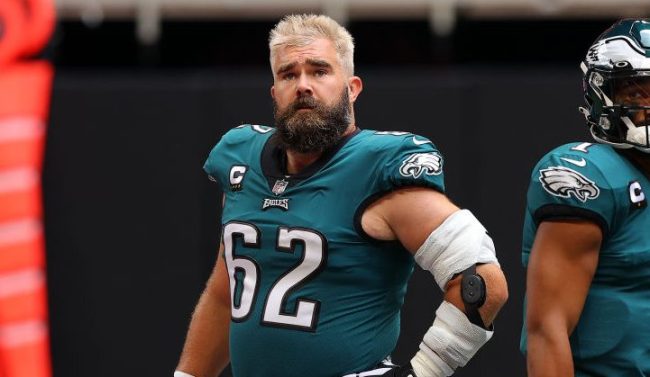 When Zach Ertz left the field after Philadelphia’s 20-14 loss to Washington on Jan. 3, 2021, it was expected to be the end of his career with the organization. Ertz, his wife Julie, his teammates, NFL analysts and fans alike assumed that the Eagles tight end would be traded.

It was all but a done deal. He was likely set to be shipped off to the Chargers, Seahawks, Bills or Colts.

However, when Philadelphia began minicamp in June, Ertz was still on the roster. And then, when the team took the field to demolish the Falcons in Week 1 of the 2021 season last Sunday, Ertz recorded two catches for 34 yards.

Despite all indication that he was to be traded, Ertz remains an Eagle and it looks like he is there to stay. As a result, his teammate Jason Kelce had to pay up on a bet.

The 33-year-old center showed up to Thursday’s media session sporting a brand-new bleached blonde hairdo. He made a bet with Ertz that Ertz would be traded before the start of the season.

Kelce lost the bet and dyed his hair, but he is glad that this was a bet that he lost.

Jason Kelce’s new hair? The result of a lost bet to Zach Ertz. Kelce thought Ertz was going to be traded before the start of the season.

Kelce said this is a bet he’s glad he lost. pic.twitter.com/e1HG8mKVeF

In response to Kelce’s new hair color, Mina Kimes referred to him as the “football Guy Fieri.” Fieri, known for his bleached tips and blonde har, saw Kimes’ newly-appointed nickname and reached out to the Eagles lineman to let him know that he likes his new haircut.