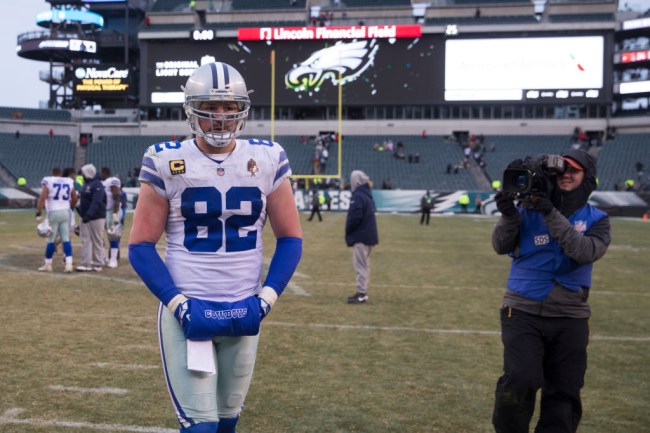 It’s been 50 years since Philadelphia Eagles fans booed/chucked snowballs at Santa Claus during its annual Christmas-themed halftime show in the midst of a disastrous season. Since then, Philly fans have booed Donovan McNabb after he got drafted, threw a beer bottle at then-Philly Ryan Howard, and one dude even intentionally threw up on an 11-year-old girl during a Phillies game in 2010. Still, the snowball incident from 1968 has followed generations of Philly fans like genetic herpes.

The reason every sports fan in America knows that the city of Philadelphia collectively unloaded on Santa is because they are still defensive over it, after all these years. Rule number 1 of sports fandom: Don’t let other fanbases know your weaknesses and insecurities.

Jason Witten, who hasn’t exactly been a Philly fan favorite over the years, is still sharpening up his broadcasting skills. During Monday night’s Redskins/Eagles game, Witten because public enemy number 1 when he mentioned the incident from 1968 within eight minutes of the game.

No mention of Reuben Foster so far. pic.twitter.com/SnUFidgEnR

If you’re looking for me, you can find me in the comments of hundreds of triggered Eagles fans.

Pretty insightful commentary there, Jason Witten, bringing up how Philly fans are so passionate that they booed Santa Claus. Except that tired and lazy storyline is supposed to be "they threw snowballs at Santa". You're so weak you can't even get your pathetic insults correct.

Witten should be fired instantly for bringing up the Santa story from 1968.

Go fuck yourself, Jason Witten. That Santa deserved it. And that happened before the moon landing.

ESPN: This is one of the top jobs in broadcasting, we have a very detailed, through interview and evaluation process

And we have Jason Witten referencing Santa Clause already pic.twitter.com/sGQAlwJcAu

Lol at Jason witten bringing up Santa claus. The cherry on top for a horrible commentating career