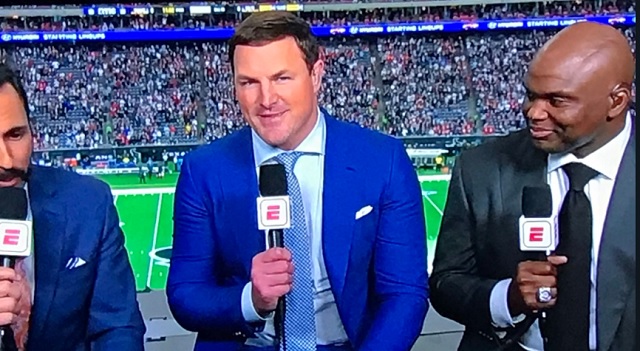 Jason Witten may not be cut out for the broadcast booth, guys. Sure, the since unretired Dallas Cowboys tight end gave it a shot last season when he became part of Monday Night Football‘s broadcast team, but, sadly, Witten failed miserably at his attempt to be on TV, constantly getting berated by fans for saying and doing things that were confusing as hell to viewers.

Meanwhile, his former Cowboys teammate, Tony Romo, was/is killing it in his transition to TV, getting all sorts of praise for his analysis and even breaking down plays so well that he’s able to predict offensive calls before the ball’s snapped. It’s why so many networks are trying to lure the former quarterback to their company, because he’s that good.

While Jason Witten left the broadcast booth to return to the field again, that doesn’t mean that he was deaf to the harsh things people were saying about him while on Monday Night Football. And, speaking for the first time about the experience, Witten detailed how everything impacted him during an interview with Ryen Russillo’s Dual Threat podcast this week. Take a look at what WItten had to say.

“Well, I think first off. Nobody’s immune to it, regardless of how much mental toughness you have. That was one of the things I kind of prided myself on as a player 15 years. I could handle the big stage. … Certainly, I took a beating. I’m aware of it. To say, ‘Hey, you didn’t pay attention to it.’ Bull-(expletive).

“Everybody’s aware, and if you’re not, you’re lying to me. … The toughest part was you finished “I’d check my texts and I’d found out I was sick or something, or somebody died in my family. ‘Hey, praying for you’, ‘Keep your head up.’ ‘Don’t worry about it.’ I’m like, ‘My gosh, it wasn’t that bad.’ I said ‘pull a rabbit out of his head’ instead of ‘rabbit out of his hat’! You guys knew what I meant, right? I screwed up, but it wasn’t the end of the world in my opinion.”

“I wasn’t immune to it. It sucked going through it at times. Once the narrative formed, I knew that it was going to be a long-game approach. I thought as the season unfolded, when Boog moved up to the booth, I thought we had two or three really good games and we were starting to kind of hit our stride. I didn’t make this decision off of the noise or the criticism. It was really just, ‘I want to play.’ The scoreboard matters, and I want to be a part of that.”

Sure, Jason Witten might be able to speak his mind now that his broadcast experiment is over (for now, anyways), since he’s back to playing again in the NFL. But with so many blunders throughout the season — including the cherry on top when he broke the Pro Bowl Trophy during the postgame ceremony — showed that Witten just might not be made out for this whole TV business.

It’s clear that football fans weren’t a big fan of his, and, when he did mess up — which was frequently — people were quick to call him out. Even if he was never going to be Tony Romo while announcing games, some of the things he said were so off that some really had to wonder if he watched film at all to prep for games he was calling.