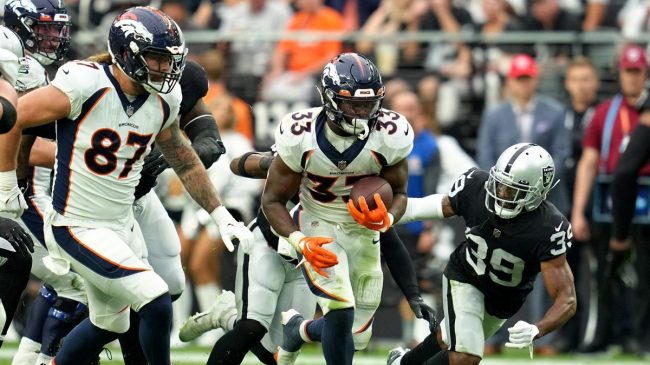 A troubling start to the 2022 NFL season just got even worse for the Denver Broncos. Sure, Denver sits at 2-2 and just one game behind the Kansas City Chiefs for the AFC West Division lead. But the way the Broncos got to that point has fans rightfully concerned.

Star quarterback Russell Wilson, who they gave a gigantic contract in the offseason, looks like a shell of himself. The nine-time Pro Bowler and former Super Bowl champ is averaging just 245 yards per game thus far and has thrown just four touchdowns.

First-year head coach Nathaniel Hackett looks well out of his depth. The former Green Bay Packers assistant was slammed for his horrendous decision-making in week one. He later admitted fault in those decisions and essentially hired someone to help him learn how to be an NFL head coach.

But up until Sunday’s game against the Las Vegas Raiders, at least the Broncos had remained healthy. Not only did Denver lose to the previously winless Raiders, they also lost a key cog in their already sputtering offense.

The Broncos selected Javonte Williams with the 35th pick in the second round of the 2021 NFL Draft. The North Carolina product immediately impressed, rushing for 903 yards and four touchdowns as a rookie. He also caught 43 balls for 316 yards and three touchdowns in the passing game.

Williams looked on track to match or exceed those numbers in his sophomore campaign, but he was carted off the field with knee injury in the loss to Las Vegas.

Now NFL Network’s Tom Pelissero reports that the injury will cost Williams the entirety of the remaining season.

#Broncos RB Javonte Williams suffered a torn ACL in Sunday’s loss to the #Raiders, per source. His season is over. pic.twitter.com/4z8SgHnPhr

While colleague Ian Rapoport says that the injury is somehow even worse than initially feared.

Not only does #Broncos RB Javonte Williams have a torn ACL, but the MRI revealed a a torn LCL and posterior lateral corner, sources say. A significant injury and a long road back.

Some are even worried about what it means for Williams long term.

we may never get to see what Javonte Williams truly could have been in the NFL. I hope he fully recovers, but this severity with his type of skill set means he might never be the same.

If you’ve got a Denver Broncos fan in your life, you may want to check on them today.