The Saga Of Jay Cutler Vs. The Chicken Serial Killer Has Finally Come To A Victorious End 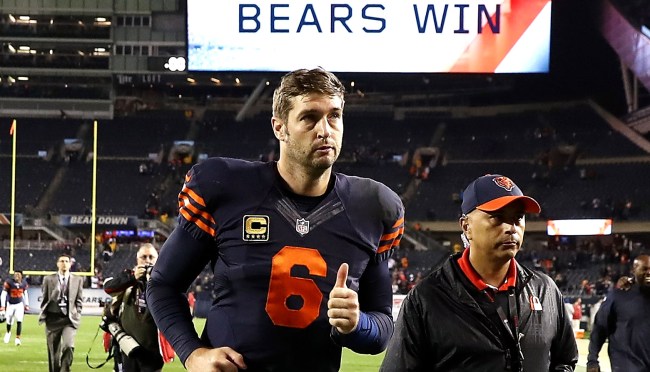 After a solid week of sleuthing, treehouse stakeouts, night vision goggles, cameras, traps, and mistakenly accusing the cat, an owl, and even Sasquatch, Jay Cutler has finally solved the mystery of the chicken serial killer that was on the loose, terrorizing Old Blue – the “coolest rooster in the game by far” – and his flock.

Earlier this week, a poll was taken using the hashtag #SaveJaysChickens, revealed that most people following the case believed the culprit would turn out to be either a fox or a coyote.

When we last left Cutty, he was still “being taunted, mocked and outwitted by a small animal.”

So Tuesday night, Jay decided to just go all in.

“Guess we all knew this was the only fitting ending to this. See u at sundown,” wrote Jay, and as his former Bears teammate Zach Miller commented, “Sh*t just got real.”

Then, Wednesday morning, Smokin’ Jay revealed that the serial chicken killer, a raccoon as it turns out, would no longer be a problem for Old Blue and his hens.

“Ok. Long night. Had a pretty good storm come through. All is well and happy to report it was a raccoon. Which fits the evidence. Chicken heads were ripped off and bodies were left in the chicken yard. Gruesome stuff but reality of the situation. Ladies are now safe and sound. We can all sleep well for a few nights. Unfortunately I’m sure this raccoon has some family members. @christensenarms will be contacting the winner via email. Congrats on your winnings. While this saga is sadly ending, I’m sure there will be more. Stay tuned…”

Fellow NFL quarterback Josh McCown, who has been following Jay on this journey and making comments along the way, summed this whole saga up best when he commented on the final set of photos, “I envision you in the top of that stand during the storm challenging the raccoon as Lieutenant Dan challenged our Creator at the top of that boat in Forrest Gump. Hero does not do it justice. From Ole Blue, Merle and the rest of the crew. Thank you Jay.”

Zach Miller added, “A chapter has ended. May Ol Blue be the protector we know he is. RIP to the ones who have gone before us, LONG LIVE THE LADIES.”

I think one commenter speaks for us all when they wrote following the story coming to a glorious and victorious end, “I’m sad this saga ended but please keep posting about your farm life. I’m living my dream farm life vicariously through you.”

“Soooo, now what do we do to entertain ourselves?” very aptly asked another.

Hopefully, Jay will get one of those NFL broadcasting jobs we keep hearing about. That or his own reality show, where he’s already shown himself to be a superstar in the making.