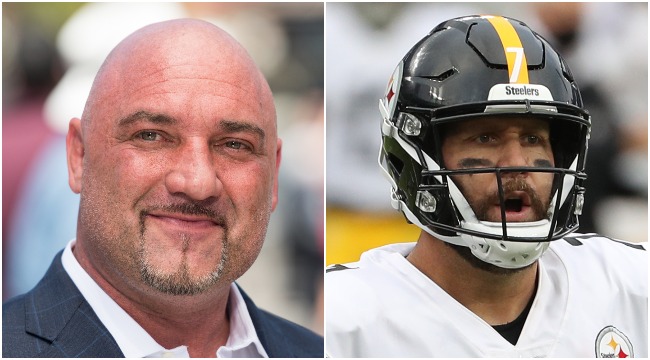 I don’t think I’m telling tales out of school here when I say that Big Ben and fitness go together like Johnny Depp and Amber Heard.

The Steelers QB has endured Eddie Lacy levels of fat-shaming over his 17-year, and you gotta wonder what content like this does to a man’s psyche.

3.5 months of IR and Ben Roethlisberger looks like very fat person/animation with a beard 😂 pic.twitter.com/Uu6Wp0UDab

Back in May, Fox Sports insider Jay Glazer pissed off Roethlisberger after throwing fuel on the fat-shaming fire:

“First of all, let’s not put the words fitness and Ben Roethlisberger together, they are allergic to each other. There is no fitness in Ben Roethlisberger. His idea of a great off-season workout program is doing one yoga session, playing golf, and drinking some beer. However, yes, what Mike Tomlin and Roethlisberger have done there has been incredible.”

Glazer joined our Endless Hustle Podcast this week to discuss the conversation he had with Big Ben after picking the scab of his insecurity.

Damage control! @JayGlazer shares how he patched things up with #BenRoethlisberger aka "Big Ben" after his joke was taken a little too seriously. Episode 18 is available for stream & download now: https://t.co/Zm4LjxBHeU pic.twitter.com/gjEnKcXZU5

“We talked the next day and I was like literally, ‘Dude are you kidding me? When did you get so frickin’ sensitive dude?’

He goes, ‘Well people think I’m not taking my rehab seriously.’ I said, ‘I didn’t say that.’

When I did that I was making a joke about Ben because that’s what I do. And Ben and I have gotten after each other. All of the sudden I go to sleep and wake up the next day and I get a call from his agent first, who I’m friends with. They call and they’re like, ‘Hey man, Ben’s upset.’ And I go, ‘What happened?’…I had no idea what they were talking about because my thing was a joke. He says, ‘Just how he’s not taking his rehab seriously.’ I’m like, ‘Dude what are you talking about?’ Mine was in a mailbag, it wasn’t like I wrote a story. So I was like, ‘Tell Ben to shut up. Call me or I’ll call him.’

I call him I leave a message that says, ‘Hey it’s your yoga instructor, Jay Glazer, give me a call.’ So then he calls back, and I say, ‘Hey dude you’ve got to be kidding me that you’re getting all moist about this.’

…And he’s like, ‘Jay look, I know I’ve never been a workout guy. I know you were joking with what you were saying.’ Because we always mess with him about it. He’s like, ‘But this time I am. It’s the first time I’m really throwing myself in.’

I said, ‘Ok, well by the time people see that, nobody’s going to think you didn’t take your training seriously because you’re going to come back and kill it.’

Listen dude, we don’t cover the Middle East. We’re not covering things that matter. We’re covering escapism. And if you don’t take yourself too seriously, you’ll go a lot longer in this business.”

At the time of this writing, the Steelers have the second best record in the NFL and Ben has thrown 29 touchdowns to 9 interceptions on 3,292 yards. At 38 years old.