By Humiliating The Cavs For 33 Points In Just 19 Minutes, Jaylen Brown Set A Wild NBA Record 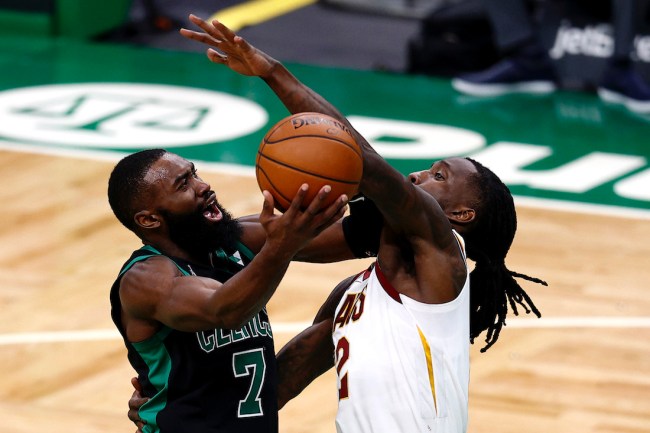 I’m not really sure what’s gotten into Jaylen Brown these past few games, but, sheesh, the young Celtics star might want to bottle this up and save it for when games really count in the NBA Playoffs. That’s because Brown has been lighting it up offensively, not only scoring a career-high 42 points against the Sixers on Friday night, but then following up that performance with an NBA record-breaking one against the Cavs on Sunday night.

With Boston absolutely embarrassing Cleveland by winning 141-103, and it wasn’t even that close, Jaylen Brown had an early exit, as the Celtics just didn’t need him to get the victory. Playing just 19 minutes, the 24-year-old ended up dropping an absurd 33 points while he was on the floor, which ended up being an NBA record in the shot clock era for most points for a player playing less that 20 minutes in a contest, per Elias Sports.

Jaylen Brown scored 33 points in the 19:14 he played in the @celtics victory on Sunday. Complete data for minutes played by NBA players exists since the mid-1950s. Brown is the 2nd player since then who scored 30 or more points in an NBA game in which he played less than 20 mins.

That’s some serious offensive firepower in a helluva short amount of time. Like, Brown was playing other professionals and not middle school kids, so, yeah, this is one NBA record worth paying attention to.

After the Celtics player scored the most points by an NBA player in less than 20 minutes since the shot clock era began, Jaylen Brown got a little kudos from some living legend named Bill Russell, who had to toss out a little love to the current Celtics star.

After being taken No. 3 overall in the 2016 NBA Draft by the Celtics, Jaylen Brown has sort of just been the steady sidekick for superstar-in-the-making teammate, Jayson Tatum, who has been battling some issues related to COVID. But this season seems to be Brown’s coming out party, as he’s now averaging 27.3 points per game; which is tops on Boston at the moment.

Who knows how the rest of the season goes for Brown and the Celtics, but when you’re doing crazy things like this, it deserves some serious applause. Guys like Michael Jordan, Wilt Chamberlain, Kareem Abdul-Jabbar and others never achieved something like this, so let’s appreciate what happened and see how long this NBA record might hold up.