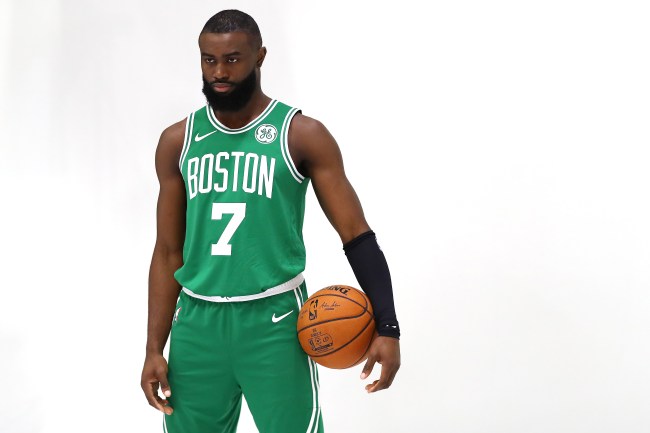 You wouldn’t be clinically insane to think that that’s a lot of money for a guy who averaged 13 points on 46.5 percent from the field during the roller coaster ride from hell that was the 2018-2019 Celtics season.

You also wouldn’t be insane to consider the 22-year-old’s high ceiling in your assessment.

JAYLEN BROWN ALL OVER GIANNIS pic.twitter.com/rFoxN3KHm8

For comparison, the Sacramento Kings offered Buddy Hield, who scored a career-high and team-leading 20.7 points per game last season while shooting 42.7 percent from three, four years and $90 million. Hield is reportedly seeking in the $110 million range.

But nobody believes in Jaylen Brown more than Jaylen Brown, and according to NBA Insider Chris Haynes, the 22-year-old is armed with veteran agent Jason Glushon and “believes in his ability to be a star and is pursuing a bigger offer.”

Brown "believes in his ability to be a star and is pursuing a bigger offer" pic.twitter.com/Fb0QS3VTFB

Historically speaking, this bigger offer likely won’t come from the Celtics, who almost never issue extensions to their rookies, with Rajon Rondo being the last to receive one in 2009.

As a Celtics fan myself, I’ve rarely ever been so conflicted on a guy. I blame Kyrie for taking all the air out of the locker room last season and stunting the growth of a player who was essential in the Celtics near Finals run a season before, but often failed to rise up under the iron fist of a melancholy point guard who couldn’t lead a happy birthday song. So right now, I’m teeter between ‘Jaylen Brown is going to be a superstar’ and ‘Jaylen Brown is 2019 Tony Allen.’ (Respect to Tony, one of the best defensive players to ever do it. Ask Kobe.)

But, the internet never sees nuance, and the idea that anyone would pay nine figures to a guy still figuring it out is appalling.

Jaylen Brown when he declines 80 for 4 years to be offered 15 for 3 in the summer pic.twitter.com/lsOTTrFPuw

The Celtics and Jaylen have until Monday to reach an agreement. If a deal is not agreed upon by then, Brown will become a restricted free agent following the 2019-20 season.