These are some HIGH PRAISES right here. Three-time NBA All-Star Gilbert Arenas puts Jayson Tatum’s name in the same conversation as THE Kobe Bryan on the latest episode of Player’s Breakdown. You can check out that full clip above. Then hit the comments and let us know if you agree with Arenas!

This video (above) is pretty quick, very informative, and for someone like myself who has never spent time with an NBA player breaking down game footage it’s extremely fascinating to witness their thought process when evaluating talent. In the clip, Gilbert Arenas discusses the changes he’s seen in Tatum’s game from his rookie season until now and the impressive growth there. He also talks about how Jayson Tatum‘s 2-3 years ago from playing on the same level as Kobe Bryant.

Make sure to watch the full video (like I said, it’s short) but here’s a snipped of what he had to say about the Jayson Tatum-Kobe Bryant connection:

You can see that he’s growing with each mistake, each game. That’s what’s more important, from his rookie season to now, turnover (then) to perfect play now. Two or three years from now you’re going to see a player who’s dominating this game on a Kobe level. Because he possesses you know, all those intangibles that’s going to make him compared to that guy (Kobe).

Kobe was great at everything. Mid-range. getting to a spot. And that’s what Jayson Tatum’s finding out he’s great at too. Getting to his spot no matter what the defense is giving you you’re going to your destination and when you get there you rise up and you hit the shot.

I don’t want to give away the full video so watch the clip for his complete quote!

Since I know so many of you guys out there love these videos I’m pleased to bring you some excellent news. For all the diehard fans of Player’s Breakdown, more episodes are on the way on Snapchat. “We’re excited to expand the distribution of our Player’s Breakdown series to Snap where it can reach a large and engaged new audience of sports fans. Having Snapchat as part of our multi-platform approach allows us to create formats of our content that cater to our audience’s preferred viewing habits and lives on the platforms they are on”, said VP of Media at Team Whistle Tyler Kenly. Check out all the hot takes and breakdowns right here on Snapchat.

In addition to the Kobe talk, it’s fun to hear Gilbert Arenas credit himself for the reason that Jayson Tatum wears the number zero. He also dove into what makes his game so fun to watch:

“Really confident players in their skill, the really great ones, they don’t get too high, they don’t get too low. We’re the type, when you’re a tiger you’re trying to figure out everyone’s weakness and right now he’s so poised that it’s kind of hard to pick up on his telltale signs. I love Tatum because I’ve known him since he was little. The reason he wears zero is because of me, The Hibachi, The Agent Zero. I love Tatum’s game. Smooth, confident, plays at his own pace, doesn’t do anything that he can’t do. As a young player that’s very important, doing things that you can do versus just trying to do something that you can’t do.”

From the way that Gilbert Arenas breaks it down, the Celtics have been Jayson Tatum’s team since Day 1 even when Kyrie was there (and missing games). The team responded really well to Tatum as a rookie and now the Celtics are putting their full support behind him: “So with Hayward moving on and they’re putting their money into Tatum it just stamps it “this is your team, these are your guys, and let’s build something special here.”.

Make sure to watch the interview above and to check out the Player’s Breakdown on Snap! 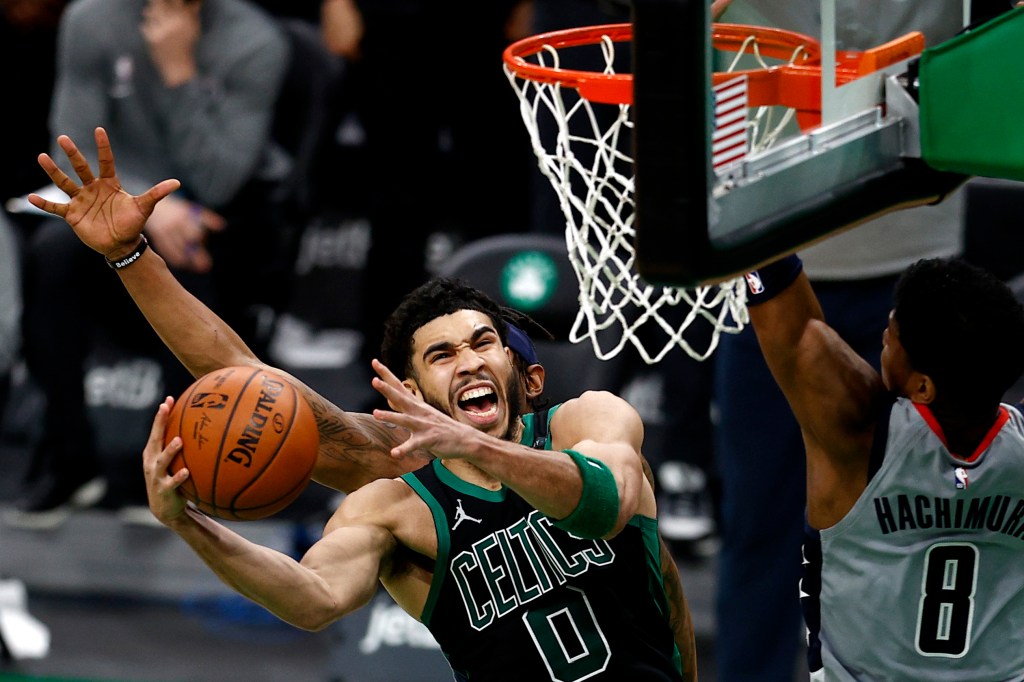