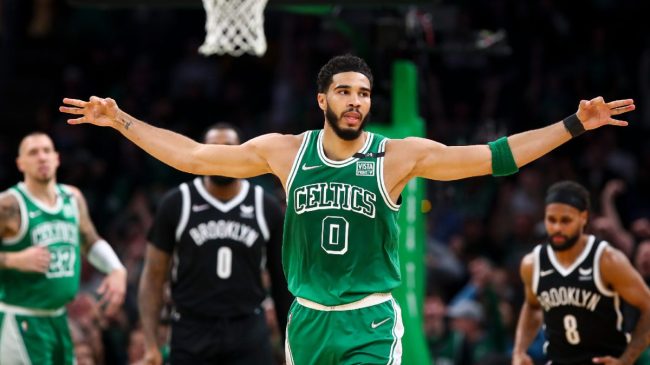 The game went back and forth, with both teams trading blows throughout.

The Nets took a slight 60-58 lead into the half before the Celtics broke away in the second half to secure the win. It gives Boston a huge bump in the playoff race as they look to improve their standing in the final stretch of the regular season.

Brooklyn, meanwhile, fell to under .500 on the year and they’ll need to make a run to get safely into the playoff field.

The game was highly anticipated with the Nets having both Kyrie Irving and Kevin Durant on the floor at the same time for the first time in months. KD returned from a leg injury earlier in the week and he hasn’t missed a beat. The sharpshooter put up 37 points in the loss.

Irving added 19 points, but it was Boston’s Jayson Tatum who stole the show.

The young forward put up 54 points on 53% shooting to lead the Celtics to victory. Teammate Jaylen Brown put up another 21 points and all five Boston starters finished in double figures.

Tatum is getting hot at the right time. He’s averaging nearly 32 points a game over his last 10 outings and has notched three straight 30+ point performances.

But it wasn’t necessarily his play that had folks talking when the game came to an end.

Celtics supporters were adamant on giving Kyrie Irving a hard time. He was booed during opening introductions and mocked any time he had the ball in his hands.

With less than a minute left in the game, Boston fans began to turn their attention and aggression to the Nets’ PG for one last moment of harassment.

With the contest seemingly wrapped up, the home crowd began to chant, “Kyrie Sucks!” throughout the arena. Tatum, however, took the high road and attempted to quiet the taunts from the stands.

Irving played in Boston for two seasons before heading out to Brooklyn. Clearly, the Celtic faithful hasn’t let it go.

Irving can likely expect this type of environment any time he steps foot in the TD Garden. Man, it would be great to see these two teams match up in the NBA Playoffs, wouldn’t it?

Still, Tatum’s reaction showed a calm maturity from a budding star. His play and character on the court are the reasons why many are tabbing him to be the next face of the league.