Jeff Fisher Is Set To Oversee The Most Unexpected, Hilarious Quarterback Battle In The USFL 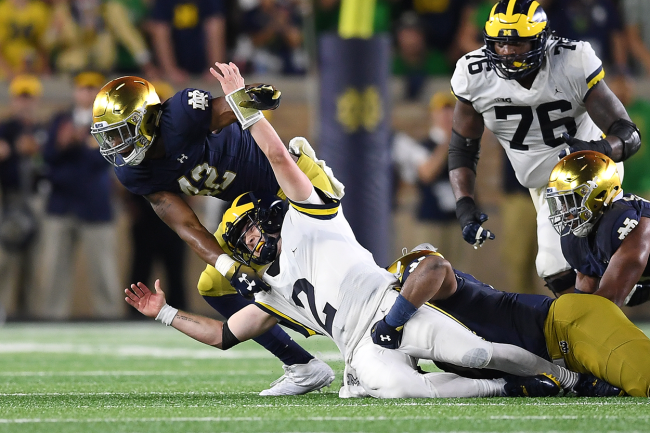 The 2022 USFL season is set to begin on Saturday, April 16 at 7:30pm ET. Before the season can begin, however, the eight teams needed to establish their rosters for the twelve-game schedule.

That took place on Tuesday night with the USFL player draft.

Although each time is assigned to a specific city, every single game will be played in Birmingham, Ala. at Protective Stadium, while some will be contested at Legion Field. With the No. 1 overall pick, the Michigan Panthers were on the clock first.

Head coach Jeff Fisher and his front office staff decided to draft a local quarterback, Shea Patterson of the University of Michigan. Patterson’s father once said that his son would be a No. 1 pick one day and his prophecy came true.

Patterson, who spent his first two years at Ole Miss, decided to transfer amidst the Rebels’ NCAA sanctions and left Mississippi for Ann Arbor. He was adamant that he was a Rebel for life in the press and then met with Jim Harbaugh at an IHOP and transferred.

While with the Wolverines, he completed 60% of his passes and went 19-7 as a starter. Patterson proceeded to go undrafted in the 2020 NFL Draft and signed with the Kansas City Chiefs.

While with the Chiefs, he lost the third-string job to Jordan Ta’amu, who took over for Patterson when he left Ole Miss and was far more successful with the Rebels. Patterson stinks.

Despite knowing all of that, the Panthers still decided to select Patterson with the first pick over Ta’amu, who went No. 2 overall.

But that was not the only quarterback selected by Michigan on Tuesday. Coach Fisher is about to have a very interesting, very amusing quarterback battle on his hands.

With the last pick on Tuesday, the Panthers drafted Paxton Lynch. He was the last of the 16 quarterbacks drafted in the USFL Draft.

Six years ago, Lynch was the third quarterback drafted — behind Jared Goff and Carson Wentz — in the NFL Draft when Denver traded up to take him at No. 26. He spent two years with the Broncos, made four starts, completed 61% of his passes and was released prior to his third season in the league.

Two years later, on June 28, 2021, Lynch signed with the Saskatchewan Roughriders. He did not dress for the entire season and was released on February 22, 2022.

It was quite the fall from grace for the former first-round pick.

With his career at the lowest of lows, Fisher and the Panthers gave him one final shot to revive his career on Tuesday. He will battle it out with Patterson to earn the starting job with Michigan.

A wild quarterback competition is set to unfold for Fisher and his team. If you had said five years ago that Patterson and Lynch would be fighting for a starting job in the USFL, it would have been laughable.

Now it is a reality.