Brett Favre’s Manhood Is Not Small, Jenn Sterger’s Tweet Is Just Too Cold 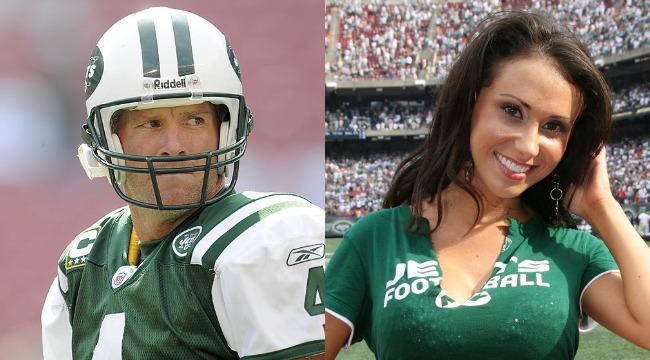 If Brett Favre could transport himself back to 2008, it’s hard to imagine he wouldn’t change literally everything about his approach to the Jenn Sterger scandal.

Luckily for the gunslinger, Favre’s wife of 25 years, Deanna, has stuck by his side a full decade after the debacle monopolized the media and Jenn has been married to former minor league baseball player Cody Decker since 2018.

Favre has allotted significant time in retirement to spotlighting the dangers of football-induced CTE, just this week claiming kids under 14 years old shouldn’t play tackle football. CNN subsequently invited Favre on to discuss his stance on concussions before shifting to the topic of vaccines, of which the Hall of Famer voiced skepticism and opted not to reveal whether or not he’s been vaccinated.

CNN blindsided Brett Favre by changing the topic during his interview from concussions to vaccines. pic.twitter.com/cwmGvc5NM4

Sterger (now Decker by marriage), who claimed to be “humiliated” by the scandal when it broke and said her life was “turned upside down,” refused to pass up an opportunity to joke about it 10 years later.

In her defense, funny is funny.

Who knew you could be scared of a little prick…. but also own one? https://t.co/OUPCexVzlj

What do you think will be the last bastion of shaming society will accept? It’s a toss up between redheads and micropenises.

P.S. The story of how the whole thing blew open in August of 2010 is astounding. Deadspin’s A.J. Daulerio (think Hulk Hogan sex tape) dirtbagged his way into outing private conversations he had with Sterger after she sent an email to him in February 2010 with the subject line: NOT A WORD OF THAT SHIT TO ANYONE. Read it here.