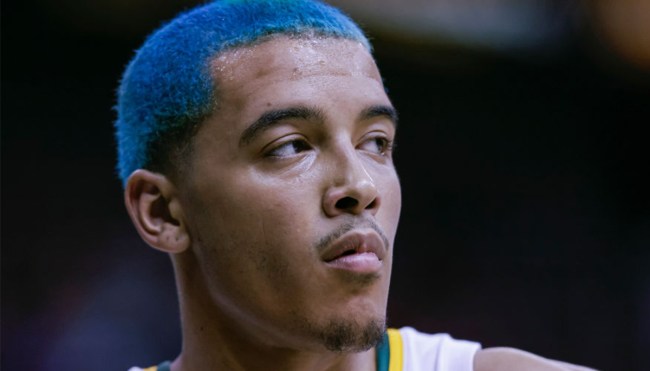 To say Russell Westbrook had a rough go of things last season would be a bit of an understatement. He certainly was far from the only reason the Lakers failed to make the playoffs, he certainly didn’t the do team many favors with his wildly underwhelming performance.

That campaign was filled with lowlights, but I’d argue the nadir was the moment the guard treated the world to an absolute master class in how to not deal with bullies after he got into it with a fan who heckled him during a game in March.

After revealing he took offense to the spectator mocking him by calling him “Westbrick,” the rest of the world took great care to make sure his surname received the deference he demanded—and by that I mean people spent the rest of the season flooding his Instagram comments with the insult and made “Westbrick” trend on Twitter every time he had a bad game.

The Baylor product was playing a Tabooesque game with Malaki Branham, who was tasked with figuring out how to get his teammate to utter “triple-double.” Sochan’s first clue was “Russell Westbrook get ’em a lot,” and he instantly responded “bricks” before realizing his mistake and delivering the correct answer.

The comment was obviously made in the heat of the moment and it was pretty clear Sochan wasn’t actively trying to insult Westbrook. Of course, that didn’t prevent way too many NBA fans from reading way too much into it.

The first-year forward eventually attempted to clear the air, saying he viewed Westbrook as an “idol” while sharing a picture of him wearing his jersey when he was younger along with a photo of his dog Russell.

Been one idol since I started watching the NBA and my dog is called Russell 😂 pic.twitter.com/OwGyNJu8Yu

It’s absurd he had to clarify things in the first place, but at least we got a great dog pic out of the situation.