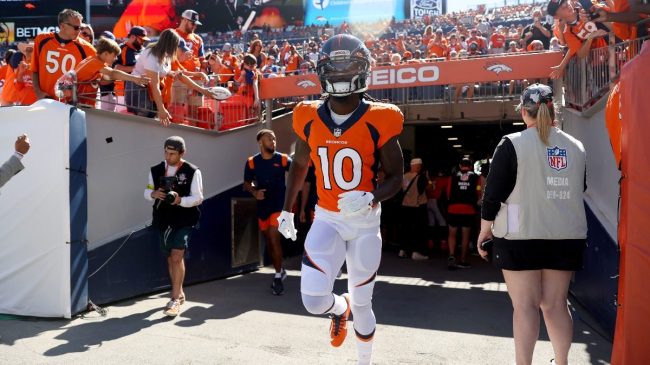 The Denver Broncos somehow found a way to defeat the San Francisco 49ers in what turned out to be an ugly game. Regardless, a win is a win and Denver is now 2-1 on the season. However, all eyes are on wide receiver Jerry Jeudy, as he had some choice words for Hall of Famer Shannon Sharpe after the game.

Sharpe shares his opinions on pretty much every athlete in every sport. He is a talking head after all. However, Jerry Jeudy didn’t seem too pleased with the harsh criticism he received from the Broncos great. Thanks to BlitzMal, we have an image of the deleted tweet Jeudy sent after the game.

Woo boy. I don’t know if Shannon Sharpe actually has bad breath or not, but that’s a pretty solid roast from the Broncos’ third-year receiver. Regardless, Jeudy deleted the tweet and had a follow-up for it afterward.

Broncos fans seemed a bit on the fence about the original tweet. Especially considering Sharpe is a Hall of Fame player for the organization. At the end of the day, Shannon Sharpe’s criticism is a bit accurate. Jerry Jeudy hasn’t quite lived up to the hype so far. Even so, he’s an amazing route runner that could turn into an elite weapon in the passing game. He just has to secure the ball more often.

We’ll see if Jeudy can bounce back after a poor effort against the 49ers. Denver is set to face off against a struggling Las Vegas Raiders. If Jeudy can put on a strong performance in Week 4, then Shannon Sharpe might be humming a different tune. Until then, keep an eye on the Broncos’ wide receiver, as he continues building rapport with Russell Wilson.