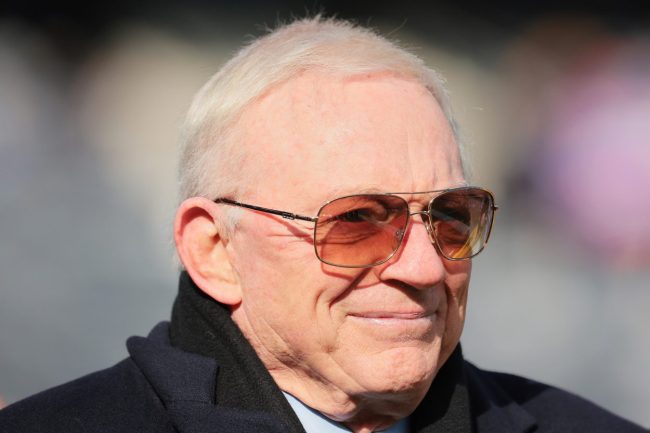 Jerry Jones’ grandson is an absolute savage. He was in the box with his grandfather on Saturday night and ruthlessly denied an Eagles fan an autograph.

During the fourth quarter of Dallas’ blowout win over Philadelphia, the camera cut to the owner’s box. There, Jones was seen chopping it up with former New Jersey governor Chris Christie.

However, as unexpected as it was, that was not the highlight of the 15-second shot.

In the far left corner, Jones’ grandson stole the spotlight.

He appeared to unfold a sweatshirt that was thrown at him in the box. After getting it straightened out, he realized that the sweatshirt was an Eagles hoodie.

Dallas and Philadelphia notoriously hate one another. The NFC East rivalry is full of hatred. There was no way that Jerry Jones was going to sign Eagles paraphernalia.

In response to his discovery about the sweatshirt, Jones’ grandson had an incredible reaction. He turned toward the fan that threw it up to him, explicitly told him “no way” and then threw it back.

After sending the hoodie back where it came from, Jones’ grandson wiped his hand as if to say “I can’t believe I just touched that.”

A lot going on here. Jerry Jones telling jokes to Chris Christie. Eagles fan trying to get Jerry to sign an Eagles shirt. Jerry’s grandson throwing it back pic.twitter.com/5aVgkzidnm

Clearly, the Jones family savagery continued down the family tree. It was an incredible display of dislike toward the Eagles, and it came during a dominant 25-point win.

Jones’ grandson won the night. There is no coming back from that as an Eagles fan.

What a savage display. The NFC East never fails to provide quality entertainment. How can you not love the pettiness?!